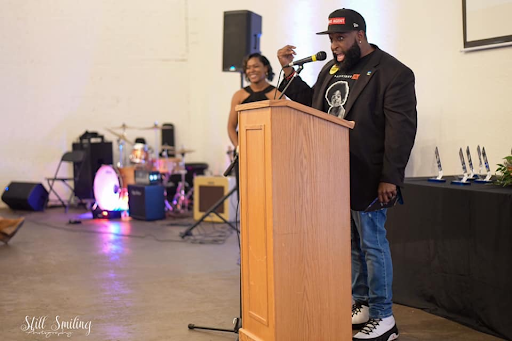 The issues of felony disenfranchisement and the onerous process of rights restoration have been brought to the forefront amid the 2020 election cycle according to local activists.

Philip Cooper, an Asheville native, now a reentry expert and economic and workforce developer, was charged with multiple felonies in 2006. He said going to prison changed his life for the better, but it also made him realize how Black people are disproportionately put in prison and disenfranchised from voting.

“Not being able to vote when I was in prison — I felt like I wasn’t a part of the rest of the population,” Cooper said. “The very people who are struggling with a criminogenic lifestyle are the same people who can vote to impact change so that people do not have to result in those behaviors.”

Cooper said the U.S. Constitution considering Black people as three-fifths of a human in 1787, Jim Crow laws and the crack epidemic still have an effect on Black imprisonment at disproportionate rates.

Rob Thomas, native of Asheville and community liaison for the Racial Justice Coalition, said he felt wronged when he lost his ability to vote while incarcerated.

“I felt disenfranchised — not part of society, not part of the decisions that were being made that control the environment that I would be released in,” Thomas said.

We need felons and former felons to be able to vote for politicians who understand the need for reallocation of resources for programs that help convicted felons reenter society, Cooper said.

It is common practice in the United States to make felons ineligible to vote, in some cases permanently, according to the National Conference of State Legislatures. Laws on felon voting rights vary state to state.

In North Carolina, anyone in prison, on parole or on probation is restricted from voting, according to the North Carolina State Board of Elections.

A North Carolina law says anyone convicted of a felony cannot regain the right to vote until they complete probation or post-release supervision and pay off all court fines and fees.

Thomas said requiring former felons to also pay fines or fees before being allowed back in the voting booth is underlying racism and felony disenfranchisement policies impact Black communities disproportionately.

Thomas was convicted before North Carolina’s Post-Release Supervision program, an independent agency responsible for releasing offenders who meet eligibility requirements established in North Carolina general statutes. After serving his sentence, he was not required to be on probation or parole, his rights were instantaneously restored.

“I was lucky,” Thomas said.

Voting age Black Americans are more than four times as likely to lose their voting rights than the rest of the adult population, with one of every 13 black adults disenfranchised nationally, according to data from The Sentencing Project.

Thomas said nationwide, including Asheville, Black people face systemic racism and inequalities that inevitably keep them poverty and more likely to be convicted. He said he did not have the same resources or opportunities as his white counterparts growing up.

“I felt angry at society because it almost felt like society was forcing me to sell drugs,” Thomas said. “I have experienced all of the disparities of the justice system and their biases, all the way from being arrested, to conviction and incarceration.”

African Americans in Asheville are disproportionately charged with common crimes according to statistics on Open Data Policing. Discrimination against Black Asheville residents leads to a disproportionate number of felony charges within the Black community. As a result, many Black people are disenfranchised from voting.

“The history of the city is bound up in Black inequality,” said Sarah Judson, associate professor of history and Africana studies at UNC Asheville.

“Black and Brown people have continuously been disenfranchised in this country from the very inception of it,” said Yashika Smith, inclusive engagement and leadership manager. “Black people and Brown people need to be uplifted to ensure equity for all.”

People with felony charges are not only disenfranchised from voting, but also lose basic civil rights such as the right to sit on a jury and the right to own, possess or use a firearm. It may become more difficult to find housing, employment, and to acquire student loans and financial aid.

Thomas said once he was released back in the Asheville community from prison, he probably would have been homeless if not for his wife’s care. He found it incredibly difficult to find housing anywhere that had a property management system. He had the paperwork to show he was making a living wage, legally, yet he was still denied because of his previous trafficking charges.

Cooper said there are racist roots in the gun control laws of convicted felons. During slavery in the United States, slave codes restricted slaves’ behaviors. Part of the slave codes was lawfully disarming slaves and freed African Americans.

“The history of slavery and inequality against Black people has affected generations,” said Cooper.

Racial profiling and gun sweeps in high-crime neighborhoods continue to disarm African Americans, according to Cooper. Also, some southern States imposed high taxes or banned certain guns to force blacks and poor whites out of the gun market.

“In this current climate I would love to be able to have a legal weapon just to protect myself and my family,” Cooper said. “I wish I could, but once you’re convicted you never get those rights back.”

Cooper added, in North Carolina, if you have certain drug charges you are indefinitely disqualified from being able to get food stamps.

“I have a friend who was just released not too long ago — he has a pacemaker and he’s a diabetic,” Cooper said. “He cannot get food stamps because of drug charges he got in the past.”

“There are a larger number of Black people incarcerated than any other race while we are the minority,” Thomas said. “The system needs to be changed.”

Pandemic increases the need to bridge the digital divide