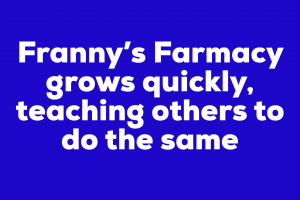 “It’s just magic. Personally, professionally, mentally, emotionally and even spiritually to be able to be the one who’s foraging a path instead of following the path that’s laid out,” Tacy said.

While her CBD empire continues to thrive, her farm in Leicester outdates the hemp industry and the popular CBD movement, she said.

“Franny’s Farm was around for five years. I woke up every morning, fed the chickens every day without a vacation, doing everything I could to operate that farm and find out how to make small-scale agriculture work, not just for me but for everybody else,” she said.

Frances Tacy said she originally planted hemp for food and fiber in 2017, facing opposition from authorities who associated the plant closely with marijuana. The DEA flew black choppers over the farm, patrolling her misunderstood crop.

“I could’ve identified them in a line-up they were so low,” she said.

“We were already farming, it had nothing to do with CBD. CBD was not even a word at the time, it was industrial hemp,” she said. “We had spent years explaining to legislators to get this passed. We were telling all the legislators people could smoke a telephone pole of this, and no one’s going to smoke it – it’s industrial hemp. It’s for fiber, clothes and food. It’s what the country was founded on.”

Frances Tacy converted her harvest from food and fiber to medicinal CBD when legislation deemed hemp federally legal in 2018. She said farmers raised $200,000 for the Industrial Hemp Pilot Program, enabling others to grow the crop and contribute to the industry.

Co-CEO of Franny’s Farmacy Jeff Tacy said the couple launched their flagship store on Merrimon Ave. in 2018 to share their harvest and benefit the public.

“Originally, it was Franny’s idea to grow hemp. Then I realized we were headed down a path of growing a new crop and figured out we didn’t have a market for the harvest. It led to the creation of the retail dispensaries, distribution and manufacturing businesses,” Jeff Tacy said.

Frances Tacey said they sold seven acres of Franny’s Farm to fund the first dispensary on Merrimon Ave. In turn, the original store funded two more locations in Hendersonville and Greenville, SC. She and her husband plan to franchise with more stores opening.

“The product goes from the field, all the way through our hands, through processing and manufacturing,” she said. “The first dispensary funded the second dispensary. Those collectively funded the distribution. We now have manufacturers, strategic partners and processing. We’re vertically integrated and take it all the way.”

District Manager at Franny’s Farmacy Clay Alspaugh said all operations are within 10 miles of each other, contributing to the brand’s vertical integration, reducing their carbon footprint and ensuring quality medicinal products.

“If you can’t trace your source all the way back through the end, there’s a problem. Right now with all the non-regulations in the market, you can pretty much bottle olive oil and sell it out of a cart and say it’s CBD,” Alspaugh said. “Consumers have to be smart and know what they’re looking at when it comes to the label and look where the product comes from.”

Frances and Jeff Tacy strive to uphold high product standards in an unregulated market, and both wear different hats in the business.

Jeff Tacy cites his journey through the ever-changing hemp business as one of his greatest challenges and most rewarding experiences. He manages the money and keeps up with current research to stay ahead of the game in a fresh, new industry.

“Jeff is below the belt. Money, guns ‘a blazing. Because he is battling the competition, operation, setting up the businesses and finances,” Frances Tacy said. “I’m the alchemist, the chemist, the vision, the higher level.”

“Without me, we’re just another CBD company,” she said.

Frances Tacy said the CBD industry welcomes creative entrepreneurs specializing in all fields – not just farming – because no one achieves greatness alone. Teamwork ensures businesses aren’t left behind in a quickly developing market.

“Be good at what you do. If you’re good in sales and marketing, open a franchise or start a wholesale account. If you are good at growing, be the best grower,” she said. “We’re back in the era where we need people to specialize and it extends into anybody in every industry. We need attorneys that represent hemp people. We need creative tax people. We need everybody. Marketing, sales, every industry. It taps into every single industry.”

She said helping others succeed feeds her passion and remains a cornerstone of her business endeavors. She will take part in the NC State Research Project, collaborating with geneticists, scientists and agronomists to disclose the first public research on hemp production since the 1900s. She also trains hemp farmers through her Women in Hemp nonprofit, helping female entrepreneurs globally.

“What we’re doing is foraging a path and setting it up for others to follow. And I’ve been saying this for years, I’m always a great example of what to do and what not to do. I truly want people to be successful, which is the difference,” she said. “There’s no single human who alone in isolation can do anything of greatness.”

As her success climbs, Frances Tacy said she holds her integrity close, staying far away investors hoping to capitalize off her hard-earned success.

“I’ve been offered millions of dollars. I say ‘It’s my name, it’s my brand, I am not a whore for you.’ I’ve turned down people representing millions of dollars,” she said. “turn around, you’re a liar, smoke and mirrors, get off my land.”

“People see me now in media and everything, but behind the scenes I’m still running a farm,” she said. “I’m up before anybody else. I’ve done more by the time most people wake up. I’ve seen my land, my animals, it’s pretty crazy.”

Frances and Jeff Tacy invite the public to Franny’s Farm for Hemp Harvest Celebration, happening every weekend through Oct. 13. They offer volunteer shifts from 8 a.m. – 12 p.m. or 1 p.m. – 5 p.m. Water, hemp and lunch will be provided.

She asks everyone arrive with a clear head, open heart and intent to contribute and work hard.

“Show up with a heartfelt intent to make a contribution and touch a plant that’s going to touch thousands of people,” she said.

Frances and Jeff Tacy look forward to sharing their discoveries, skills and passion with other entrepreneurial and creative minds, further contributing to what Frances calls a “revival.”

“We’re rebuilding and showing people how to revitalize,” she said. “It’s a revival, not a revolution. It’s not a fight, it’s a revival. All we’re doing is bringing back the old. Hemp is the oldest medicine that was given to us by the creator – the same creator that created our bodies with 300 receptors to receive that plant as medicine and food for our body.”

Understanding the history behind the rise of Asian hate