When it comes to adequate mental health care in North Carolina, money matters, according to Brian Shuping, Executive director of community relations at Vaya Health. Asheville faces a big divide in the quality of treatment for mental health patients as a result of lack of government funds.

“We manage those funds and ensure there’s quality services in place for folks that might need those,” Shuping said. “We have a huge network of providers that have contracts with us to carry out these services.”

Shuping said the North Carolina general assembly allocated funds that allow Vaya Health to provide these services for state-funded clients, which have been on a consistent decline since 2016. The lack of funds has forced Vaya Health to provide these beneficial services out of their own savings. Presently, they are now at the point where they financially sustain that anymore, Shuping said.

“There is never enough money to take care of everyone’s needs. For years and years the system has been set up to take care of folks with the most severe needs. We need to provide more funding for folks with depression and more mild behavioral symptoms,” Shuping said.

One could easily tell why Shuping leads community relations for such a vital community organization. His slow, southern drawl reflects the laid back, easy going virtues often found in Asheville residents. The lack of funding at hand for milder behavioral cases is an issue close to home for him. He mentions how his nephew is austistic, highlighting his own investment in the cause.

Evans appears and sounds exhausted. She shuffles around her house while muffled baby moans echo over her attempt to tell her story. Evans owns her own business, operating as a doula until going on maternity leave in 2019. She initially enjoyed being at home, tending to her newborn while her 13-year-old and 9-year-old were occupied at school — until the coronavirus hit.

“All of the sudden, everyone was home. We didn’t leave the house a lot, for like months. I developed plantar fasciitis, where your feet really hurt. I wasn’t even really getting outside,” Evans said.

Once her baby was six months old and there was no end of COVID-19 in sight, Evans began to heavily consider going on an antidepressant.

“I felt like I was losing my mind,” Evans said.

Evans doesn’t have health insurance. According to data provided by the U.S. Census Bureau, 12.5% of Buncombe County doesn’t either. As of July 1, 2019, there are a reported 261,191 people in Buncombe County, roughly translating to around 32,648 residents who are uninsured.

“I went to the Minnie Jones clinic and started as a patient there. Everything was seemingly well, I was impressed with the services and the affordability,” Evans said.

Evans was able to get on an antidepressant and attempted to resume life as normal, until her mental health worsened again. Schooling became virtual and Evans was forced to juggle more responsibilities than ever. The mental toll of isolation, along with micromanaging her family of four brought back the feeling of impending doom. Evans, for the second time, emphasizes the feeling of losing her mind.

“I was supposed to be seeing a counselor from Minnie Jones, but they have dropped the ball quite a few times. I would be scheduled for a session, I would be ready, have all of my stuff, then log into the Zoom and the person wouldn’t be on,” Evans said.

Evans briefly paused from her story, telling her daughter they will have playtime shortly. Evans clearly carries that type of strength only parents possess, shielding away any hint of harm from her child.

“So after that missed appointment,” Evans continued, “they would apologize. Be so sorry, claim something went wrong. They would claim the therapist would be in a meeting, or on a call, then they would reschedule me.”

Evan’s rescheduled appointment wouldn’t be for another three or four weeks.

“There were these huge gaps in care that I was supposed to be receiving through them. And then they got me a psychiatrist,” Evans said. “Well, the psychiatrist talked so fast through the appointment, to the point where she apologized. I thought she was just quickly glazing over protocol, paperwork, etcetera and then be like, OK let’s talk.”

Talking never happened. Evans felt bamboozled by the hurried appointment, which swiftly ended with the psychiatrist saying she will see Evans again in six weeks. Evans felt slighted. She disappointingly detailed all the stress she wanted to talk about, as well as wanted to voice her questions on the new medicines she was switched to. Her medicine dosage dropped from 60 milligrams down to 5 milligrams, with seemingly no explanation.

“I called back and spoke with her assistant, asking if we could speak again. Her assistant said yes, however she was booked until November. I was just upset. These are my only options,” Evans said.

Although you can hear the stress in her voice, Evans does not appear defeated. She prides herself on being resourceful, knowing there may be other providers for uninsured people like herself.

“I am pulling out all the straws that I can, but I know there are huge gaps in care,” Evans said. “I am somebody who feels like they are in dire need of mental health therapy and help.”

Evans’ struggle with consistent care currently remains commonplace due to the lack of funding.

“It’s kind of a really messed up system and it leaves a lot of cracks,” Brock said.

“During COVID-19, there were a lot, a lot of cuts to some of our local services. For example,  the Behavioral Health Urgent Care Center, was a 24/7 walk in. The BHUC was this awesome thing that was established four or five years ago. It is now running on half the hours and half the staff and so if you had an emergency in the middle of the night, you had nowhere to go except the emergency room,” Brock said.

The funding involves a lot of politics, according to Brock. She said the lack of funding leaves people high and dry. Key services, known as wrap around services, which rely on provided funding by Vaya Health, also got cut.

“These services exist essentially to help people function,” Brock said. “Wrap around is for folks that, if there’s not somebody there really helping them transition and kind of hand holding sometimes, then they will fall through the cracks. They won’t take their meds, or they can’t get to their appointment, or they can’t pay for it. There are these teams of people who make sure you do these things.”

The issue of mental illness versus physical illness

This ongoing problem resulted in the National Alliance for Mental Illness issuing North Carolina an ‘F’ in the way they treat mental health, according to Tom Maynard, former President and current board member of the Western North Carolina chapter of NAMI.

“For many years, mental health services were not paid for in the same way by health insurers as were physical illnesses,” Maynard said. “So if somebody had a mental illness, in some cases they were not covered at all, in some cases, if they were covered, there were different limits than for physical health.”

A few years ago, the national congress passed a law mandating parity, which required that any healthcare plan that offered health services had to have an equal amount of accessibility for mental health services, according to Maynard.

Maynard said they don’t really do that.

“Nobody running a healthcare plan gets a prize for handing out money,” Maynard said. “They get prizes for NOT handing out money and for improving profits. It’s a big risk for them to be exposed to the potential cost for mental health.”

Asheville residents advocating for a change

According to Shuping, the budget for mental health funding gets decided every other year. Shuping said Vaya Health receives the new funding in two year increments.

“We continue to try to advocate, we continue to try to show how the money could be used and how that would impact folks,” Shuping said. “We also try to educate our community, and do a lot of work with commissioners and county managers across our area and our elected officials in the general assembly as well. We try to advocate for more care and more money for folks we support.”

Although Shuping would not be the direct point of contact towards the assembly, Shuping would like them to know that there are a lot of folks struggling with substance abuse issues, lots of behavioral health issues. Covid-19 has increased these issues, Shuping said.

“There continues to be greater and greater need, I can’t understand how they continue to decrease financial resources for these populations,” Shuping said.

Brock also advocates for more funding at a state level. Where the money goes, she says, becomes where you are placing importance and value.

“I think decreasing stigma, normalizing and then creating access to mental health care is so important,” Brock said. “I just want to tell the higher uppers, do it because it’s good to help people but also because it’s going to save you a ton of money. If you can get people integrated in society and supported and working and not going to the emergency room every time they are having a panic attack, it’s good for everybody.”

According to Brock, it seems to be a tough sell.

“Everybody is experiencing a lot more stress these days,” Maynard said. “We could all use a little support.”

If you or someone you know has questions about how to access resources in the community, NAMI can be reached by phone at 828-505-7353 or by email: info@namiwnc.org. 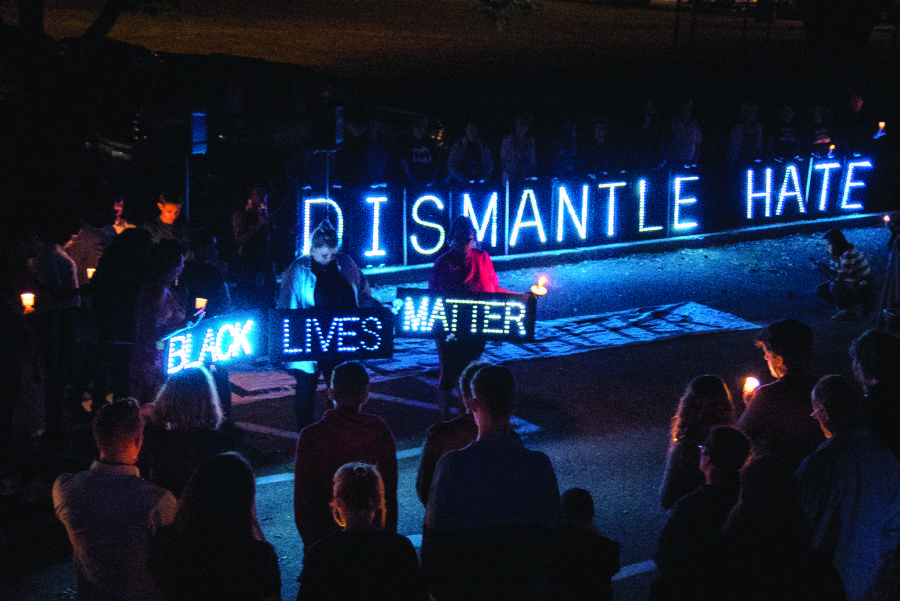