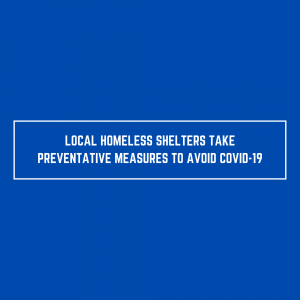 Downtown Asheville is practically bare with the exception of construction workers and the few homeless people occupying the streets and parks. Most other homeless people are in safe conditions, under quarantine, thanks to local shelters.

“We’re not letting anybody else come in that hasn’t been here since the beginning of the pandemic. We are in isolation and have had roughly 135 people sheltered in for the last four weeks. We’ve been providing service to them including showers and meals,” said Michael Woods, executive director of the Western Carolina Rescue Ministries.

Due to the risk of possible exposure to COVID-19 outside of the shelter, the organization is not letting anybody else come in, even those who were already in the shelter from the beginning.

“We’re not closed. If people leave, they can’t come back. People need to make decisions to stay without any promise of the Coronavirus going away. We did a screening and we still do checks on everybody daily. There’s a large number of people here with compromised health including about 40 people over 70 years old and around 20 children,” Woods said.

Those who have left the shelter or just couldn’t make it in time are out in the streets, dealing with the implications brought on by the Coronavirus.

To Tony Edwards, a homeless man in Asheville, the shelters are seemingly closed.

“No churches open. None. Not one. Rescue missions, homeless shelters, all closed. I tried getting into a shelter today and couldn’t get in. They’re not taking nobody. I sleep wherever I can,” Edwards said.

“We would look closed to someone out on the street. We’re not closed. We just can’t take in anyone new. And that’s just not us, that’s every shelter in the state,” Woods said.

However, the shelters operating under Asheville Buncombe Community Christian Ministry are still taking in new residents as long as they prove to be healthy and virus-free, according to executive director of the ministry Scott Rogers.

“We are still taking in new residents as some move out with jobs and homes. We require evidence of having a prior two weeks of demonstrating healthy quarantine and behavior, or residents must self-quarantine in-house for two weeks upon arrival,” Rogers explained.

The organization acted promptly at first notice from the CDC in regard to COVID-19. These guidelines included three phases: prevention, mitigation and quarantine/isolation.

“ABCCM moved swiftly in the beginning by adopting CDC guidelines. We developed a new strategic plan that covered all three phases within 72 hours of the CDC announcement on Mar. 9 about how serious the situation was and is,” Rogers said.

ABCCM has so far avoided any signs of contamination within their facilities, proving their preventative measures successful. According to Rogers, the organization follows the CDC’s guidelines very strictly. This includes cleaning common areas every hour instead of the recommended two hours and cleaning all doorways and entrances every 15 minutes. There is also a nurse who works with team leaders to run checks on the health status of all residents four times a day.

“The Veterans Restoration Quarters capacity is 250 men and Steadfast House at 50 women and children are at full capacity. To date, we have had about 20 men and 12 women tested and all have come back negative,” Rogers said.

With 300 people at ABCCM, 140 at WCRM and 110 at the Salvation Army, about 550 beds are filled in Asheville, meaning about 95 percent of Asheville’s 580 homeless persons are quarantined, according to the last Point-in-Time count on Jan. 29. According to some homeless people, there doesn’t seem to be any evidence of contamination within the homeless community outside of the shelters.

“It hasn’t affected me physically or anybody I know out here, but I know to keep my distance,” said Asheville local Joseph Hughes Jr., who has been homeless for 15 years.

“I don’t know anybody who has it. A lot of homeless people out here are healthy. Very healthy. I have a lot of health issues but I know God protects me,” Edwards said.

According to Rogers, both the city and county have refused to help any of four shelters in town, including the two at ABCCM, the WCRM and the Salvation Army. The city did, however, agree after four weeks of requests from all shelter providers, to open the Civic Center to house up to 50 beds for those who are at high risk.

Buncombe County also has a contract with four hotels containing 270 beds which can be used for quarantine and isolation of any homeless people, health care workers, first responders or others who may need to be isolated from their families.

“The City does not see its role in providing health and human services as this is the traditional role of the County who administers all health and human service funds from the federal and state governments. While we would all like these leaders to do more for our particular vulnerable populations and bring in more resources to meet our particular priority, they are doing a good job with what they have and what they know to keep us all safer and are to be commended, in my humble estimation,” Rogers said.

According to an executive director report sent out to the ABCCM board on Mar. 31 by Rogers, projected meal costs were expected to rise from 85 boxes of food a day to 120 boxes of food a day through April and beyond as a result of the pandemic. The report also notes the cost of purchasing 1,000 boxes of food is $30,000, at $30 a box. This means it would take roughly 12 days to go through 1,000 boxes of food, or $30,000 if the number of food boxes needed per day were to remain at 85. At this rate, the organization is donating over $70,000 worth of meals alone per month. The number of food boxes needed daily have since gone up.

Donations can be made to both WCRM and ABCCM to help provide services to homeless people in the Asheville area.

A quest for justice: How sexual assault on campus is processed