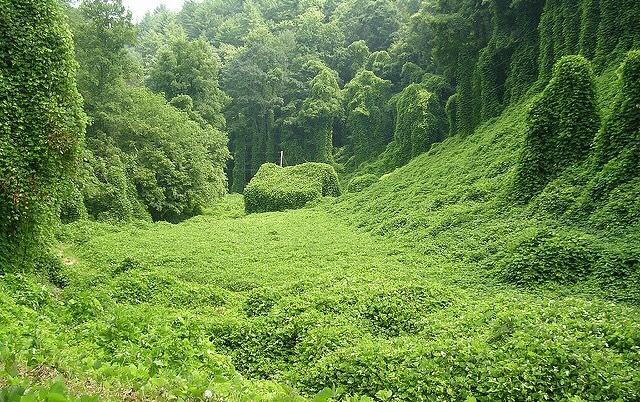 Invasive species grow to be a problem in Asheville, thriving in the climate and wreaking major effects on our local environment and economy here in Asheville, experts say. RiverLink, an Asheville-based non-profit organization, works to maintain the French Broad River and remove invasive plant species nearby.

“Invasive plant species are a problem in Western North Carolina because our native species do not know how to compete with them because they never had to for hundreds of years before invasives arrived here,” Blue said.

According to Blue, invasive plants even have the power to affect local economies.

“There are farms that are right next to the river and if your riparian zone is constantly being taken over by Kudzu, that is cutting into your farm and possibly profits, and it is almost impossible to control,” Blue said.

“One of the key characteristics of an invasive plant is its ability to outcompete other plants in that ecological niche.” Taylor said.

Anne Read is the watershed resources coordinator at Riverlink and explained how invasive plants harm native plants and ecosystems.

“Invasive species take attention away from native plants in every way. Whether it is sunlight, space or water. They outcompete the native species for those important nutrients. Some invasives, like English ivy, actively choke native plants,” Read said.

Read also explained that invasive plant species do so well in the Asheville area due to the damp and rainy season, similarly to the southeast Asian area where vines like Kudzu are from

When moving or traveling, it is easy to spread invasive plant species without realizing it, as they can be difficult to spot. Many states such as California do not allow plants to be brought into the state at all in order to stop the spread of invasives. An average person can stop the spread of invasives by educating themselves, according to Read.

“Educate yourself. If you’re moving some plants or traveling, know your surroundings. Getting an expert involved is always a good idea,” Read said.

Riverlink works on controlling invasive species on 18 different sites in Asheville. One of which is Reed Creek Greenway, only five minutes away from UNC Asheville’s campus. Riverlink hosts public service days at Reed Creek Greenway to remove Kudzu, which is an easy way for students to get involved. Riverlink has a special events calendar where students and community members can see upcoming events.

“You don’t always have to get down and dirty to get involved with Riverlink. You can come out and just enjoy a festival and learn about our message. You don’t need to dig up Kudzu to learn about invasive species and what we do,” Blue said.

Riverfest is an example of a fun way to get involved with Riverlink, with its live music, local beer and food available for patrons. Riverfest serves as a fundraiser for Riverlink and will be held at New Belgium Brewing on July 20.

Fake news could be bad news for press freedom

One thought on “Local non-profit weeds out invasive plants”