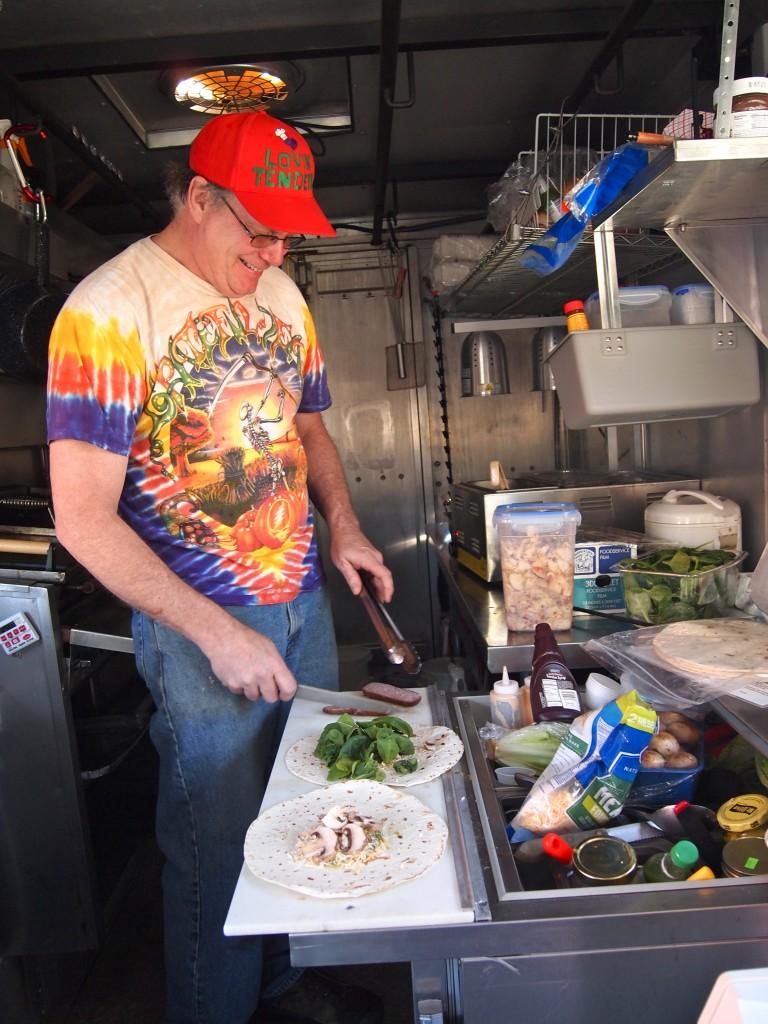 The combination of good food, a big yellow truck and a man in a Grateful Dead T-shirt describes the new type of eatery that came to Asheville last week when Craig Hoge opened his food truck, Lovin Tenders, for business.
“Moving from having your own restaurant that has, you know, four or five waitresses, a couple line cooks and prep cooks to having a truck where it’s just you and one to maybe three other people is like heaven to a guy like me,” Hoge said. “I love to cook. I like to make people try different stuff.”
Hoge runs his food truck in front of the I&J Food Mart on Haywood Road in West Asheville, where he said he offers a wide variety of food.

“So far, we’ve been open three days, and we have sampled more food than we’ve actually sold,” Hoge said. “People have come up, and they’re ordering one bratwurst, and we’re sampling some gumbo (and a) weisshurst because it’s not common around here.”
Hoge said the gumbo and the Cajun bratwurst are his favorite items on the menu.

“I will take a little pride in my Cajun bratwurst because I’ve tried every cajun bratwurst I could stand in the country, and I really don’t like them,” Hoge said. “They’re just spicy hot. They’re not Cajun brats. This is a really good bratwurst injected with my own stuff, and then marinated in it for a long time to where it gets the seasoning and the flavor, and it’s really seasoned and really flavorful, but it’s not really hot. It’s just really good.”
Hoge said prior to the food truck, he owned his own restaurant outside of Memphis, Tenn., for the last nine years.
“(The restaurant) was part of a three-in-one gas station,” Hoge said. “It was in a small town outside of Memphis, Tenn., but I got all the good blues musicians and bands coming to see me every Saturday and Sunday morning. We had a fun time.”

Hoge worked as a chef before he opened his own restaurant.

“I started out as a dishwasher,” Hoge said. “I worked my way through years of restaurants in my high school years. My dad was president of a restaurant company called Odom’s Country Junction in Nashville, and they were owned by Odom’s Tennessee Fried Sausage Company. I trained all the grill cooks. I trained guys my age now how to do that job when I was 16.”

Hoge and his wife moved to Asheville after selling his mom and pop restaurant in Memphis.

“My last restaurant really was the reason for the food truck,” Hoge said. “I wanted to move out of Memphis badly. I’ve been there 20 years, and that’s way too long. My view on Memphis is it’s got great barbecue, great blues and the best carjacking you can get.”

“The food truck business is one of the highest-evolving parts of the restaurant business of this time,” Hoge said. “The whole reason I got into it is because I started hearing a whole bunch about food trucks, and I was like I don’t know, there’s a roach coach here and there, and you see them and they’re kind of sketchy looking, and you don’t really want to eat at them. Now there’s a movement coming up where it’s high quality food trucks.”
Hoge said that while he is pleased with the end result, it was hard to get there..
“That truly was on the border of being a nightmare because it just seemed like it took forever and there was all kinds of different little things,” Hoge said. “There’s a lot of things that I had to do to it to make it up to (the city’s) snuff, and it was a headache but you know every city has their rules.”

Hoge said his business attitude, centered around positivity and fun, makes the work worthwhile for him.
“That’s all I’m in this business anymore for is fun,” Hoge said. “I totally got this food truck to have a little place I could sell my food and make a little bit of money and not have to work for the man.”