UNC Asheville is worth the money, officials say, but the recent jump in the cost of meal plans worried some students.

Between 2010-13, the university’s meal plans saw a modest increase of less than 3 percent per term, only to undergo an almost 10 percent jump for 2013-14. Concerned students, many expressing they knew nothing about the increased costs, said prices increased for menu items at the campus’ dining locations and meal equivalency options diminished.

Of the 10 percent increase, 7 percent resulted from the North Carolina General Assembly’s tax increase, a fact the university attempted to make clear to students, according to Nancy Yeager, associate vice chancellor for student affairs.

“The university sent out notices to students before their bills last December and also posted the information on the Student Affairs website,” Yeager said. “To my surprise, we actually heard very little from students at the time.”

According to campus employees, the university gains nothing from the tax increase and the money goes directly to the state. The campus finance department works with Chartwells, the university’s food service company, to keep price increases to a minimum while providing options uncommon at other campuses.

“Meal equivalencies aren’t common at other universities and they’re very cost ineffective for the food vendor, due to the fact that many of the retail outlets are franchise or local businesses who set their own prices,” Yeager said. “Chartwells actually ends up eating any additional cost for a retail meal equivalency.” 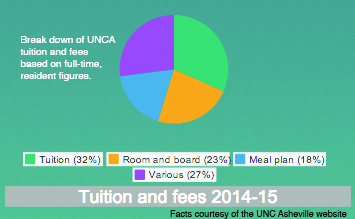 Yeager said UNCA worked to preserve meal equivalencies under its most recent contract with Chartwells, but eliminating them may have found support among some students.

According to students who purchase meal plans, more options in a meal plan makes the deal sweeter.

“I don’t think taking the meal equivalencies away would have been such a bad thing if they had kept the meal plan options they had last year, and had a wider variety of choices in the caf,” said Valerie Cruchon, a 20-year-old junior. “I had to go with the $400 plan because it was the closest thing to the old plan.”

“This year, I also did my own comparative review at convenience stores as a check and in many cases, I thought the proposed price increases were too high and not justified, so many items saw no increase, a smaller increase and a couple even a decrease in price,” Yeager said.

Students said they like the recently completed renovations to Brown Hall.

“Our dining hall was very outdated and didn’t allow us to provide the kind of atmosphere and types of cooking that students these days expect at a college or university,” Yeager said.