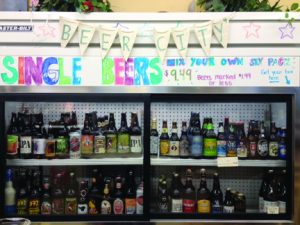 Asheville’s “Beer City” diversity offers local college students flavorful, fermented opportunities to learn the art of craft beer, whether by merely drinking it or creating it at home, according to local.

“There’s a lot of entrepreneurship that’s available to them to open up their own brewery,” said Laura Thurston, 29, an artist at the Altamont Brewing in West Asheville.

Asheville locals said craft breweries invent new takes on recipes each season, so fresh taps surround college students in Asheville with new breweries such as Sierra Nevada still to come within this year.

Organic lovers even have a niche at Pisgah Brewery, which brews organic beers.

Thurston said the menu gives customers an opportunity to educate themselves.

“I think that home brewing and micro brews in general are on the rise,” said Haley Martin, a senior at UNC Asheville. “College kids are the people who are going to be most interested in it because, ‘what do you mean I can make my own beer?’”

Martin, 22, moved to Asheville from Key West, Florida, and said the massive variety available in the craft brewing scene drew her the trade.

Martin and her boyfriend, Josh Weinert, 25, attended a free home brewing class at Asheville Brewers Supply, and since bought their own equipment for brewing.

“The brewing process takes three hours or so,” Martin said. “I’ve done homework and brewed beer at the same time.”

The motley variety of materials available in Asheville not only gives a chance for brewers to have an educated taste in beers, but also provides more creativity in their beer making abilities, brewers said.

The brewers supply store, established in 1993, helps students of the craft get started. They sell everything from taps and bottles to beer recipes and style guides. The store hosts two demo classes on Sundays to introduce new home brewers to the hands on process.

Each class samples beer from the last class, since home brews need roughly a month to ferment and condition.

“Anything goes,” said Tom Athos, 66, a worker at Asheville Brewers. “We have hundreds of recipes for basically any style of beer.”

Home brewers are often drawn into the process for one of two reasons, Amos said, “hobby or cost.”

After buying the equipment, each bottle costs less than a dollar and the savings gives college students more quality and quantity in their money spent.

The store provides hops to locals, but also sells to small businesses in Spruce Pine, Burnsville and Sylva.

Home brewers who frequent the supply store crafted almond-pear beer and lychee-hazelnut, to name the two most experimental beers that Amos recalls.

Bars like Green Man Brewery and Wicked Weed embrace the array of experimental drafts as well.

There are countless flavor profiles that go into creating a distinct style, many which take time to recognize, Caruso said.

“It’s like what farmers drank before there was Gatorade,” Caruso said.

Dwight Mullen reflects on his career at UNCA