From uppers to downers and everything in-between, mixing drugs, illegal or not, with alcohol causes extreme health concerns especially among college students, according to university counselors.

“Finding out how alcohol interacts with these things is terrifying,” said Natalie Karr, certified peer educator.

For the last two weeks Karr worked on her Program in a Box, Peers Educating Peers and Advancing Health, with the topic being the consequences of mixing ethanol or alcohol with both illegal and pharmaceutical drugs.

“I think one of the most dangerous combinations that you can take is something that is a central nerve system, or CNS for short, depressant and then a sedative and combine it with alcohol. They will both completely bring you down, to the point where you can fall into a coma, your CNS shuts down — you can die basically,” Karr said.

While the percentage of students who use alcohol and pills together across UNC Asheville’s campus is unknown, Karr and her mentor from the Health and Counseling Center, Barbara Galloway, counselor and substance abuse coordinator, can only assume that it is higher than already thought. Currently, PEPAH attempts to address this specific problem.

“I know that a lot of people take PCP and it’s used as an anesthesia medicine sometimes. What happens is, if in moderate doses, it can make you dizzy and out of your mind. It really depresses your central nervous system and there are cases where people have died because of this and a lot of people don’t know that. That terrifies me,” Karr said.

“Ecstasy is another one. People who take ecstasy could have a really high amount of dehydration and the body loses the capability to regulate temperature, which causes a lot of problems with blood flow and hypertension. Those being two important things that help regulate your body could cause devastating effects,” Karr said. 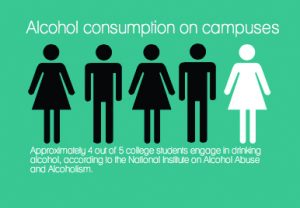 Karr, a chemistry student, said ibuprofen could cause gradual liver damage when mixed with excessive drinking of alcohol and she enjoys learning about how certain molecules attack other molecules within the body.

“General symptoms and some things that people should look out for are dizziness and being incompetent. Along those lines people may faint or pass out. If they verbally can’t communicate, if things ever get that far, definitely call an ambulance and definitely get to a hospital,” Karr said.

According to Karr, students generally use alcohol and pills at various social gatherings.

“I had a friend who mixed Adderall and alcohol together and he started talking funny, his mouth was moving in the wrong directions compared to the words he was saying. Then his eyes started rolling. It was scary, I didn’t know what to do,” said Alyssa Sprinkle, sophomore.

At UNCA there aren’t many events that explain this topic, but Karr said she plans to share her knowledge through her Program in a Box as well as hosting discussions and presentations from her research.

What UNCA currently has, according to officials, is an effective decision making class. This class is given to students who violate UNCA’s  alcohol and drug policies.

“It’s primarily given to first time violators. The course is designed to be interactive and supportive, not confrontational,” said Blair Jenkins, the associate director of Residential Education.

Jenkins said he hopes to assist students by providing resources on campus.

“Our primary goals of the class are to allow students to assess their personal use behaviors, educate them on indicators that may develop into a more serious problem, let them think critically about plans and goals for the future,” Jenkins said.