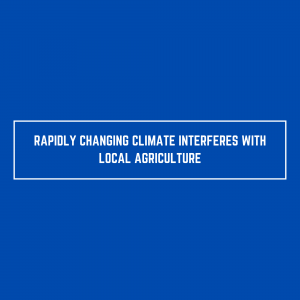 Climate change impacts many different fields and organizations in Buncombe County. The surrounding
areas are working and collaborating to promote climate resiliency and sustainability, Meghan Baker sees the impacts to agriculture and food supply in the region.

Baker sees effects of severe weather first-hand by visiting farms every day around Buncombe County as farmers deal with a changing climate.

“While we might still have the same number of average rainfall inches in our area, those storms are coming
much more furiously and intense. How that translates to the fields is that growers are having a lot of water related problems,” Baker said.

In recent years, the growing season in our region has been growing by a few days, Baker said. The first and last frosts are creeping earlier and later in the year.

The Cooperative Extension promotes sustainability in farming as environmental protection, but also for
financial protection. Baker said more sustainable farming practices are less prone to weather-related impacts, which have been more common in the last few years.

Baker works as the small farms extension agent at the North Carolina Cooperative Extension’s Buncombe
County center. She works in the field with fruit, vegetable and alternative crop growers daily. Originally from Jackson County, Baker has always been interested in farming. She grows crops
on the side for herself during her free time, which she said was part of what drew her to her current job. Beginning her career working with Christmas tree growers, she has worked with many different crop varieties.

Baker also said severe rain events have been increasing in intensity and number in the last five years. This leads to more flooding and water moving in the fields, and if water quality is not good, this translates to a contaminated crop.

To combat this, the extension troubleshoots solutions with farmers, like raised beds for some crops.
It’s not common for farmers to complain about more growing days, but those extra days bring their own set of challenges.

“So, we are seeing more growing opportunities, although for some crops that can be problematic. If we have someone growing blueberries for instance, those earlier, warmer springs might cause those blooms to open earlier than they typically would. Then if we do get a late frost, that has a potential to wipe out that entire crop for that season,” Baker said.

Danielle “Dee” Crocker owns a small farm near the border of McDowell and Burke counties called Skydance farm. She and her husband Jason run Pick Dee’s Berries and have around 3 acres with about 1,100 rabbiteye blueberry plants and 800 blackberry plants. Dee Crocker is originally from Brunswick, Maine, and moved to her farm five years ago. One year later, she and her husband married on their farm. Now, she also works at the local fish hatchery. After their wedding is when she started planting. Their newest addition is almost five thou- sand strawberry plants, which grow currently on a raised bed system to aid
with irrigation.

Crocker said their farm experienced early blossoms on their blueberries and they also saw a late blueberry harvest this year. Crocker said she asked other blueberry farmers in the region if they were experiencing this as well.

“They said they were having the exact same problem, it’s good to know I’m not the only one,” Crocker said.

Her blueberries were not affected by the frosts too heavily, but the blackberries were. Luckily, the entire crop was not wiped out, but the farm did
suffer a loss.

“Our blackberries weren’t fooled by warm February and March weather and blossomed normally in April but were hit by a frost April 27 and then again on May 8, which is really quite late. They were toast after that. We had about 10 percent of the predicted harvest survive, but luckily they are hardyplants and will try again next year,” Crocker said.

Crocker hopes to get Pick Dee’s Berries into the agritourism market after the pandemic settles down. The whimsical statement piece on her farm is a wooden platform with wonderful views of the farm and surrounding mountains with a white, metal spiral staircase leading up to the platform.

As Crocker led the tour around her farm, her flock of nine guinea close behind and one of her goats meandered close by. Nearby, Crocker’s chickens squabbled over a locust, and the great Pyrenees guard dog, Yeti, barked from
the goat pasture.

Then, Crocker found a Craigslist ad for a staircase in Charlotte, which someone needed removed from their porch.

“So, I recruited my mom, husband and his brother and made it a family affair, and we lowered it down without killing anybody. That thing is stout!” Crocker said.

The adult fort serves a practical purpose as well. Crocker’s blackberry plants are visible from the road and her parking lot, but her blueberry plants are not. So, the spiral staircase serves as a reference point for customers blueberry picking as well as a roadside attraction.

Baker said with more warm days, more insect pests have the opportunity
to multiply into higher populations. She sees traps in the fields catching certain types of insect pests earlier than usual as well.

“This year in particular, I may have been noticing them more because this would have been our first big year,
but again, I asked other people and the guys that grow corn around here said ‘this is the worst year I’ve ever
seen,’ and again I was like ‘I’m glad you’re saying that because I’m losing my mind over here!’ So, I felt like the
numbers were increased,” Crocker said.

Crocker’s aspirations of agritourism include plans for a berry barn and certified kitchen to offer bakery creations from her harvest. The Crockers built the footings for the berry barn already and Crocker is applying for grant money to move the project forward. The berry barn would be a place where customers could buy produce
and get out of the sun while they are on the farm.

“That’s the ultimate vision, to build a cabin-esque looking thing,” Crocker said. “I wanted it to have a cabinesque
feel, people are going out and picking their own berries, and it’s very primitive in its own.”

Crocker will soon apply for the WNC AgOptions grant. This grant awards $6,000 and can be earned up to three times. Crocker hopes to finish the berry barn with the money.

If they farm full-time, small farmers can be disproportionately affected by costs to offset the effects of climate
change related impacts. Baker said these small farms do not get funding from federal and state levels like some
larger farms do, but they are adapting.

When costs from supply chain interruptions affect small farmers, product prices can go up and climate change is increasing the likelihood of those interruptions.

Karin Rogers works as a research scientist and the current interim director over the National Environmental Modeling and Analysis Center as well. NEMAC operates out of UNC Asheville’s Rhoades-Robinson Hall and they use mapping to research climate-related risks to communities.

“Just a handful of years ago, there was a rockslide that closed I-40. Nobody could get to Tennessee for a couple months. Things like that really do impact the supply chain. Truckers couldn’t come through I-40 and that’s a big deal when you’re talking about delivering goods like food,” Rogers said.

Weather and climate-related impacts like the rockslide show some of the ways climate change could impact
the supply chain and prices of goods and services. Evan Couzo said these price increases will impact neighbor-
hoods and communities with poorer populations. Couzo, an assistant professor in the education department at UNC
Asheville, said weather-related climate change impacts do not affect everyone in the same way.

“Of course, climate impacts are going to be felt disproportionately, particularly in a small area like the Asheville area, in poor and minority neighborhoods,” Couzo said in August.

The education professor said reasons behind this include economic and social disparities in minority neighborhoods as a result of racist policies. When local farmers grow sustainably, interruptions in the supply chain and consumer price changes are minimized.

“We need to do a better job. It is not so black and white. We need to come together and figure out what’s best for our community members and, you know, if it is more expensive, then why the hell aren’t we changing the farm bill or whatever to make sure that our farmers are making more money?,” Weaver said.

Weaver said system thinking bars action in the face of climate change. She said people are reluctant to change
the systems in place.

“We don’t do that well as a nation, so we have been sitting with systems that have been created and are a hundred years old. If you go and change a system, there are multiple unintended consequences because they’re connected to all these other little microsystems and I think that’s the way we’re going to have to address stuff like that,” Weaver said.

Baker said small farms are a large part of direct local produce supply, and in the face of the pandemic when people are looking for more local sources of food, she said farmers are showing their importance now more than ever.

Small farmers like Crocker are finding solutions to the lack of funding they receive by applying for grants like those she earned for her building projects. Resiliency is a virtue valued by farmers, especially small farmers.

Their harvests can vary drastically from year to year, like Crocker’s did this year. Looking at Crocker’s berry plants reveals hope for next year’s bounce-back harvest.

“I think in our area we’ve got a lot of ingenious growers that are very adaptable. Farmers in general are an extremely adaptable group of people. They work with nature every day, they have to adjust and pivot all the time, so I think they will be able to keep pace with that, it’s just a matter of being able to be prepared for not only climate risks, but societal risks, like this pandemic is showing us,” Baker said.

Parsons Math Lab takes the scare out of equations