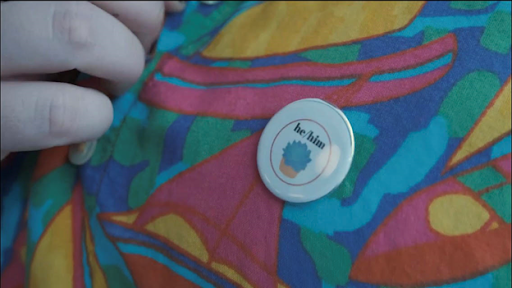 “I wear a binder and I cut my hair short, and I would love to have top surgery one day, but other than that, I am pretty comfortable in my body,” Crawford said. “Even when the rare month comes that I do have my period, I kind of just take it as is.”

When sharing his gender identity with his family for the first time, he was met with negative reactions and their blatant denial of the gender that Crawford knows he truly is.

“I tried before to come out to my family and express how I feel, but the negative reactions like, I’m not ‘actually trans’ and I’m ‘traumatized and that’s why I’m disassociating from my gender’ or I’m ‘too young’ were sorts of phrases that pushed me back into the closet by my family, so it’s not something that I talk about there,” Crawford said.

His family’s initial responses essentially illustrated a rejection of Crawford as a person, which proves a common and unfortunate reality that exists for many transgender people.

“Whenever I tried to come out and they pushed me back in, I think it was part of them not wanting to come to terms that I am transgender, because that’s a whole new can of worms to deal with on its own, not to mention being open about my identity in some places can be pretty life-threatening, if not a threat to my future financial security,” Crawford said.

Despite the damaging reactions he received, Crawford decided not to harbor resentment toward his family. He feels perhaps their reactions are a result of being ill-informed and not knowing what being transgender truly means rather than something more malicious.

“I used to hold them at more fault for what I’ve experienced, being forced back into the closet with those phrases, but I feel like it’s more of a denial and ignorance sort of thing rather than blatant and loud transphobia. It’s still transphobic and it still hurts, but I don’t think they mean it the way it comes out,” Crawford said. “They’ve been generally accepting of the LGBTQ+ community as a whole and my own ‘involvement’ in it, but I think they think I’m just a big ally for the community. In more recent years I’ve

stopped talking about it so openly.”

Those who identify as transgender are often ostracized by cisgender people due to a lack of understanding, according to Jamie Brazell, a licensed marriage and family therapist and certified sex therapist in Asheville.

“The average cis person doesn’t have a whole lot of education or understanding around the complexities of gender expression. People tend to be afraid of what they don’t understand and also hold biases that are reinforced by their limited social circles, subcultures and the culture at large,” Brazell said.

Crawford was not out to anyone back in his hometown of Waxhaw, so his first time hearing his correct pronouns was as a college student at UNCA.

“Coming to college was a bit of a slap in the face. I wasn’t out to anyone back at home, so when I came here and was called my correct name and pronouns, it was a bit shocking at first. I don’t think I responded well in the first week, even though I knew my name and stuff. It’s great, though, to hear everything and know it’s just right,” Crawford said. “I never really felt incredibly open about it in high school, so I really came out of my shell when I came to college and had a space I could truly be myself in.”

In many places, transgender people do not have the space to feel whole, according to Tricia Osterberger, a licensed clinical addiction specialist and social worker based in Asheville.

“Outcomes in mental and emotional health for transgender people, in general, are below what we see for mainstream white, Christian, cisgender, or heterosexual folks. Wholeness and belonging are essential to a human’s mental and emotional wellness,” Osterberger said. “Without it, we see increases in depression, anxiety, PTSD, substance abuse, eating disorders, obesity, codependency, relationship issues and suicide rates.”

Crawford, 20, recalls a relatively normal childhood, though he hated being made to wear dresses and gravitated toward activities which society has coined as conventionally masculine. It was not until Crawford explored the internet that he understood how people can change the gender they were assigned at birth.

“I was raised, like many, with the pink princess aesthetic as a little kid. I did grow into being raised more neutrally as my interests expanded into more traditionally masculine hobbies, such as video games and certain ‘boy’ cartoons I would watch on TV, playing outside in the woods and sewers and mud, but I never really had much indication that I was anyone other than who I was,” Crawford said. “This semi-neutral lifestyle I was raised in, like having to wear dresses for formal events, which I hated a lot, didn’t do much to indicate that I was somewhere on the gender-diverse spectrum until I landed on the internet and realized that sometimes people can change who they are and that’s OK.”

Currently serving as the secretary for UNCA Out, the university’s LGBTQ+ group, living on campus has allowed Crawford to embrace his authentic sense of self, and experience living as he truly is.

“Over time I became more comfortable presenting masculine and it felt right to me, with short hair and a different name and different pronouns. It was something that just clicked in my head, something that helped me understand, along with my sexuality, that I was me,” Crawford said. “I’ve always tended to just dress more masculine, in T-shirts and shorts, and I’m small enough to be considered a 12-year-old boy, which is not the ideal situation, I’d like to look my age, but this is how I’m going to look for a while, so I’ve gotten used to it,” Crawford said.

Even so, Crawford still experiences gender-affirming setbacks. He describes one such situation when first starting at UNCA where he was misgendered by a cis male roomate during his freshman orientation.

“I was roomed with a cis dude, and the moment I walked into the room, he and his dad just looked at me like ‘Um, you sure you’re in the right place?’ And it made me super uncomfortable to even think about staying there for one night, so I asked to be put into a different room and I was all by myself. I do not think their intentions were to be directly transphobic toward me, they could have just been ignorant in how gender diversity actually works, but it would be a lot of uncomfortable questions and I wasn’t ready to deal with them yet so I just got a new room,” Crawford said.

“Because they are also vulnerable to having violence inflicted on them, many trans folk report feeling unsafe in various settings. This has a tremendous impact on stress levels and the

Brazell said.  “I have seen a lot of trans folks who have been horribly mistreated by cis people, and sometimes that has been mistreatment or abuse by someone who was supposed to be caring for them. I’ve heard horror stories about blatant misuse of pronouns, using dead names, or even worse, mistreatment.”

Misgendering proves to be a common occurrence for Crawford among his classmates and friends, who often accidentally misgender him by using the wrong pronouns. While this can be hurtful for many transgender people, Crawford takes such incidents in stride.

“It slides off my back at this point and I don’t usually pay too much attention to it when it does happen,” Crawford said. “I know a lot of other transgender people can really get hurt a lot by it, but for me personally it feels like a little bug bite that goes away after a day.”

Like many students, Crawford had to move out of UNCA’s dorms, and back home with his family due to COVID-19. For Crawford, this meant he could not live as authentically as before.

“Being sent back home was quite the struggle. I was incredibly stressed that I would be in a zoom call with a class and someone on either end would out me – either one of my family members hearing the name I go by here, or one of them calling me by my dead name and outing me to my classmates,” Crawford said. “I was fine to dress however I wanted and keep my hair short; I just couldn’t wear my binder in the house. Not that I particularly minded, since I wasn’t leaving the house, I didn’t feel the need to put it on, but it would’ve been nice to have it as an option.”

Transgender discrimination can range from bullying, to various forms of microaggressions like being passed over or not hired in the workplace, being misgendered or families insisting on calling them by their dead name, according to Osterberger.

“I call these microaggressions but really some of these are pretty aggressive without being physically violent,” Osterberger said.

According to Brazell, much of the discrimination experienced by their LGBTQ+ patients often lead to trauma which negatively impacts the individual.

“Trauma impacts people in all sorts of ways. It can look like chronic anxiety or depression, over-functioning or under-functioning, dissociation, reports of frequent nightmares, hyper-vigilance, or the feeling of not being safe,” Brazell said.

“Despite all of this, I do believe in a concept known as post-traumatic growth. Some of my most inspiring patients have been LGBTQ+ folks who have suffered and overcome unspeakable trauma,” Brazell said.

Osterberger said studies show how gender non-conforming children have just as strong a sense of gender identity as those whose identity matches their biological sex and observes gradual, yet progressive changes toward gender expression and acceptance.

“I think we’re seeing it more now because there’s language for it and parents are more comfortable giving their kids more latitude in their gender expression. Not all families and not every city and town, but the fact that we’re having this conversation at all is indicative of the changes occurring around these issues,” Osterberger said.

For Crawford, returning to campus for the fall semester proves to be a welcomed change after being so isolated back home, with only his family to interact with.

“As I got more adjusted in being back home, I started to feel very closed off from everything, and I was socializing with just my family for the months between March and now,” Crawford said. “Getting back to people my age that I could talk to felt so nice, I didn’t know I missed it.”

On campus app gets students Yakking