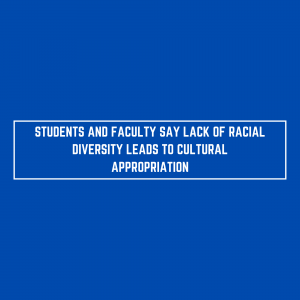 Negative imagery and misrepresentation harm children by perpetuating racist stereotypes that minimize the oppression felt by these cultures in the past, said Trey Adcock, the director of the American Indian & Indigenous studies program at the UNC Asheville.

“I think it’s more complicated than what people think it is,” Adcock said.

Misrepresentation and stereotypes are a result of cultural appropriation and are all connected to prominent issues seen today, according to Adcock.

Cultural appropriation is taking another person’s culture without knowledge of the culture and oftentimes uses it inappropriately to the original form
Adcock said.

According to the most recent census, the racial composition of Asheville is 83 percent white, 12 percent Black, 2 percent two or more races, 2 percent Asian and 0.33 percent Native American.

It is not surprising that UNCA ranks low in racial diversity, considering the region’s racial makeup, said

UNCA’s spring 2020 census of enrolled students reported, 80 percent of students were white and the remainder were BIPOC students.

“All of the branding that you see at UNCA is super diverse but you get into your classes and it’s just whitewashed. I’ve been in classes where there was only one person of color,” Meyer said.

Meyer said whitewashing creates a sense of security around white people that allows them to enjoy any culture without backlash. Meyer said UNCA officials could help advertise student organization led events to promote diversity on campus.

“I know that we have communities and organizations on campus, but they aren’t advertised enough. I only know they exist through the people who are in them rather than advertisements through the community,” Meyer said.

“We have all sorts of diverse courses like our diversity intensive classes that we’re required to take in order to embrace this ideal that it’s not all just white yet there’s a bit of contradiction because this is stolen Native American land. They are trying to make it right, it’s better than a lot of schools, but they’re not doing enough for the actual
students or the actual people and their cultures here,” Meyer said.

“The lack of culture on this campus makes me feel neglected in a way because being a POC I am contributing to this university, but I do not necessarily feel as if I am one with the community,” Her said.

Adcock said cultural appropriation is taking another person’s culture without knowledge of the culture and oftentimes using it inappropriately to the original form.

“When we think about race, nationality, those labels are cultural constructs that have a specific history most of the time associated with colonization. Sometimes when wetalk about those labels we forget that within those labels there are a million of communities,” said Juan G. Sánchez Martinez, an assistant professor of Spanish at UNCA.

The domination, exploitation and assimilation of cultures from deliberate colonizing government policies and systems to suppress non white communities were used to impose Western systems and ideals, according to Sanchez .

“Growing up as an Asian-American, we inhabit a lot of westernized thinking and actions. I think cultures are reshaped to have that western element,” Her said.

“Misrepresentation inflicts harm to people of those cultures by taking these and misrepresenting them throughout colonization, media, those sorts of things it creates a misguided visualization of these people and their lives,” Meyer said.

Her said culture is dynamic and conveyed through human expression, knowledge, belief systems, art, social institutions and other methods. Culture helps create social structures and norms within a community that allows the individual and the collective to experience and interpret the world.

“Appropriation happens when the person and the group are trying to find their own and they take from others and that’s when you’re not standing clear in who you are. That can be confusing for everyone,” Sanchez said.

Adcock said cultural appropriation teaches everyone the wrong lessons. Meyer said it could be Halloween costumes. Dressing up as Disney’s Pocahontas turns victims’ stories into costumes.

“If we have white people appropriating us, they’re basically saying that they can do our culture better than us and so then we become obsolete. The way they systematically hurt us and murder us eventually, it’s like they’re pushing us away and so we’re not really needed anymore and white people could be the caricature version of us,” according to Livvy Barnes, the vice president of the Student Government Association.

“Privilege isn’t really a bad thing, it just matters how you use it,” Barnes said.

The confusion Sanchez talks about can be used with good intentions. Privilege shows what you do with it makes a difference in the community.

“Someone could say the education system can be responsible, that maybe mass media can also be responsible, capitalism, the business mindset that is trying to take and exploit everything, everything that can be sold. Responsibility goes in many ways,” Sanchez said.

Adcock said in other ways that it comes from the individual.

“I do think there is a responsibility and maturity that comes with saying ‘I want to wear these things or do these things.’ Knowledge of the community that’s some sort of permission that’s some sort of responsibility to the origins of those places. I just think that that’s good practice. But white privilege is literally they don’t have to,”
Adcock said.

Meyer said her privilege as a white individual can do a lot for the BIPOC on her campus.

“It’s not my place to speak for them in any case, it’s my right with my privilege to let them have a platform and let those people speak for themselves. I can advocate for them, I can stand behind them, I can stand beside them, but I can’t do that job for them because it’s not my right. I don’t understand their experiences, I never could so in turn I take the little power that I have and turn it into something that I can create good with.”

Meyer knows her white privilege comes with a platform that she can give to BIPOC. Her, as a person of color, expresses that her platform is to inform those around her.

“As an Asian person I can learn things and educate my family and friends. I can help my people to be more culturally sensitive,” Her said.

Side Bar: Cultural appropriation in Asheville

Native American community affected by mascots and appropriation Colonization of America paved the way for the erasure of Native Americans. Regulations and systems were placed to forbade them to practice their religions or speak their languages. Their traditions were mocked and used for dominant white culture aesthetics and fun. When Native Americans fought for the use of Indian mascots to come to an end, outcry from the public soared. Indian mascots were largely seen in schools, college sports, and professional sports. During a time when Native Americans were and are still fighting for their rights, their identities and lives were erased from the media and education.

“Native people are really seen as invisible in larger American society. Native people are the marginalized of the marginalized. I think society at large doesn’t see Native people and can project these images without blow back or reservation,” Adcock said, a member of the Cherokee nation. Many organizations such as the National Congress of American Indians and American Psychological Association have fought and continue to fight for Native Americans, he said.

The fox eye trend has over 76,400 hashtags on Instagram and commonly used by celebrities and within the beauty community. This trend was commonly used by white girls creating a makeup look that transforms the way their eyes look that resembles an Asian eye feature.

The trend came out during the racism Asians felt when COVID-19 surfaced earlier this year. In history, it is notable that Western features were desirable from the facial features of double eyelids to the hair features of straight and silky, to the way one talks.

The stereotypes and racism placed on Asians because of their eye features have been felt by many.

“I think that the fox eye trend is very offensive to the Asian community because as an Asian of Hmong descent we have grown up to be ashamed for the way our eyes were shaped,” Her said.

A coastal luxe homewares business based in Torquay, Australia, run by a daughter/mother duo has placed on their website store a “Malibu coffee table” for the price of $349.95.

In July, when members of the Laotian and Thai Communities came across the coffee table, it bore a heavy resemblance to their Pa Khao that they use at home and at their temples, an item that originally ranges from $30 in price to $100. Since receiving the backlash from the community, Black Salt Co. issued an apology statement on their Instagram story. The owners proceeded to add a small description on their website underneath their item for the origins of the table. However, many Thai and Laotian individuals were still upset that the apology statement was conditional and did not take any accountability. Black Salt Co. was reportedly deleting comments and blocking users who called for further action, according to Kelly Phommanchanh on Facebook and Kimberly Nguyen from NextShark.

“I’ve seen this issue on Facebook and it’s horrible that companies are profiting off of other cultures and dismissing the community at the same time. Taking partial accountability is not really taking accountability, that’s white privilege,” Meyer said.

Her said that she appreciates social media for calling out companies like Black Salt Co. for cultural appropriation or else these companies would continue to be unchecked. Today the item can still be seen on their website and advertised on their Facebook page.