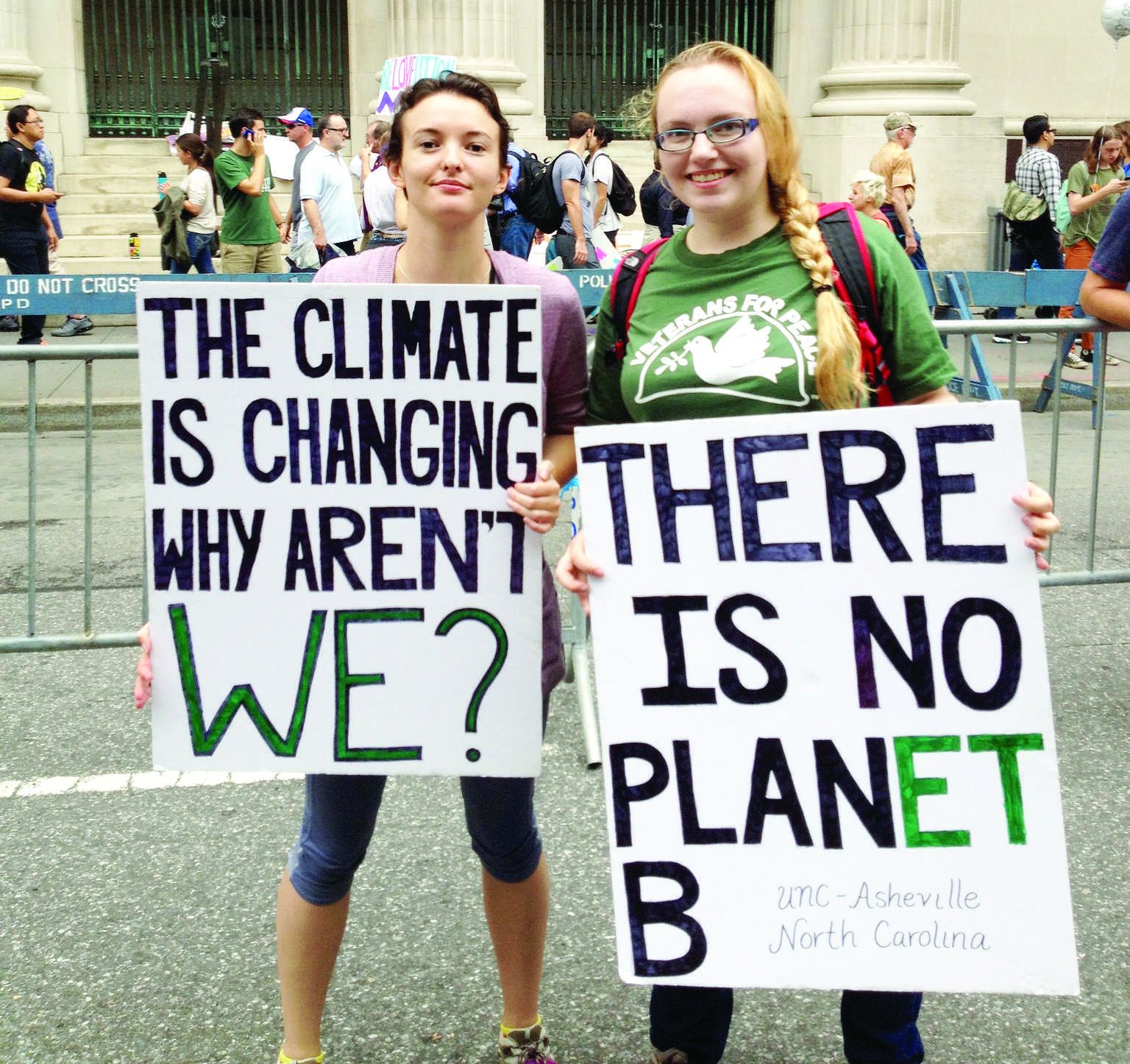 “I was really surprised about how peaceful everyone was,” said Jane Smith, a senior environmental studies student. “Because usually at protests, especially protests about such a huge issue, kind of get tense, but everyone was very respectful. I waved at cops and they waved back.”

Police read the protest signs and acknowledged their point, according to Merry Hughes, senior and Student Environmental Center coordinator.

“You never had a feeling of aggression,” Hughes said. “It felt like a unified moment.”

Indigenous people, the groups most affected by climate change, led the rally while many other communities of students, scientists and environmental organizations followed. Simultaneously, 2,646 rallies occurred in 146 countries worldwide.

Marchers split up into contingents ranging from a student group to a family group to those based on locality, ethnic origin or economic status — demonstrating the diversity of the movement to confront climate change.

More than 1,000 organizations represented themselves at the march. Students exchanged views with people from across the United States.

Attendees said it demonstrated that people are ready for change.

“I was very surprised at how much people are catching on and feeling betrayed by Barack Obama, by the Democratic party, by corporations which are claiming that they’ll fix the problem,” said Aaron Rothemich, senior and International Socialist Organization co-founder at UNCA.

Hillen said there remains a concern over whether the switch to renewable energy will cut jobs, but even labor activists marched to show that they are ready to make the switch.

Like Hillen, Williams Parker, a senior and ISO member, said he came away from the march more concerned about the connection between climate change and economic injustice. Others, like Caroline Bluhm, a freshman, went with that in mind.

“I wouldn’t say that environmental issues were some of the ones I felt the most strongly about, but seeing how it affects people, it is now,” Parker said. “These people are stuck with landfills and environmental waste because they don’t have money to get rid of it. It’s something that people know and they don’t always focus on it.”

Parker and Bluhm were among the seven members of UNCA’s chapter of the ISO attending the NYC Climate Convergence on Sept. 20.

The series of workshops and conferences centered around the idea of system change not climate change. The discussions framed environmental degradation as a social justice issue. Speakers included eco-celebrities like Vandana Shiva and Naomi Klein.

“We feel that capitalism is going to fail to address the issues of climate change — the ideas of profit and resource conservation are diametrically opposed to each other,” Rothemich said. “Without radical change, we are not going to be able to stop our dependency on fossil fuels.”

“It shows citizens getting involved where they live,” she said.

Rothemich, who identifies as an ecosocialist, said he felt pleased that 10,000 people comprised ISO’s contingent at the march. He met ISO members from other cities for the first time.

“It was really enlightening to talk to people who have been veteran activists for 10-20 years,” he said.

The ISO brought a lot of energy to the march, chanting through megaphones from 8:30 a.m. – 4 p.m., according to the group’s leader.

It disappointed Rothemich the march’s organizers did not have formal demands in place.

“What that allowed was for the people to decide what they wanted,” he said. “You saw demands all over the group and of course it was kind of unstructured, the way that Occupy Wall Street was.”

Several students noted they have yet to see how far the affects of the march reach.

Ashley Hillen, UNCA student, said encouraged by the scale of support the march showed, but doubts the activists’ work is over.

“Were we speaking to the people who needed to hear it most?” Hillen asked.

One thought on “Students attend climate march in NYC”