Students and family members fill every available seat in the Highsmith Grotto, some standing along the perimeter while others choose to sit on the ground. The lights dim as the Fortisimamas take the stage. Everyone in attendance leans forward in their seats as the female acapella group captivates them with their twist on modern music.

“What we know about student involvement is that when students are involved on campus, they are more likely to retain, graduate and succeed at universities,” said Fred Tugas, ​associate director of programming​ at UNC Asheville. “Student involvement promotes student success.”

“There is just so many different opportunities for students to get plugged in. We are working to continue to promote that to the campus community,” Tugas said.

A portion of student fees go to student organizations

Each year students pay a fee which goes to different departments on campus, such as student organizations, Highsmith Student Union and the recreation center. The facilities that receive a portion of the money are available for students to use free of charge. However, only a small number of students take advantage of these facilities. 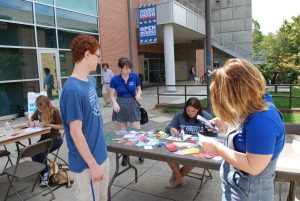 “There is the allocation of organizations, which is part of a larger process. Our office only gets a portion of it,” Tugas said. “Highsmith Student Union, our actual department and the management of this facility, is completely student-funded.”

Tugas also said student organizations, such as Underdog Productions, get a portion of the allocation. To get the money, each organization has to present its budget plan to a panel of elected student officials. At the budget hearings each organization must explain its mission, its achievements and how its activities benefit the campus community.

Debby Schwartz, director of campus recreation at UNCA, said a portion of student fees are given to the athletic department, allowing for students to attend sporting events without having to pay at the door.

“Students are paying for it, whether they use it or not,” Schwartz said.

How many students take advantage of these opportunities?

The recreation center offers a wide variety of activities for all UNCA students. Some activities offered include the gym, zumba classes, intramural sports and outdoor recreation.

Schwartz said about 50 percent of UNCA students take advantage of the recreation center.

Some larger organizations on campus keep estimates on the total number of students who attend their events. The Student Government Association estimates most of its events this year have been a success. Charlie White, former SGA president, said SGA had a fairly successful year of events.

“Some of our biggest being last semester’s presidential debate screenings that saw turnout of around 90 to115 students each. Another of our bigger events, A Conversation on the Election and its Outcomes, was co-hosted with several other campus organizations and saw 75 to 100 attendees,” White said.

“We’re also looking forward to being able to better track this information using the new UNCA Now system. We just used it for the first time at one of our last programs of the semester, the Black-Jew Dialogues, which saw 65 turn out,” White said.

When describing the new system, White said the application allows the organization to not only keep track of who attends the event and how many people are attending, but to also collect data on the demographics of the attendees.

All events hosted by Underdog Productions are free for all student and faculty at UNCA. During the 2016-17 school year, UP held more than 100 events on campus ranging from Live at Lunches to movies in the Grotto.

At almost every UP event in the 2016-2017 school year, attendance was tracked using CheckPoint. This app allows UP members to scan a student’s OneCard and record their attendance.

The numbers UP records at each event get compiled into a list used by UP members when planning for future events. Attendance ranged from 10 students to 300 students at various events throughout the year.

UP splits into four committees who plan different events for students to attend. The four committees include Movies and Film, Acts and Performances, Homegrown and Awareness.

Schwartz said she notices a variation in attendance at the recreation center.

“It usually decreases a little as the semester goes on. I think people get busier. I think sometimes in the spring when the weather gets nicer some people end up doing some recreation outside,” Schwartz said. “We are really busy January and February because of New Year’s resolutions.”

Why aren’t students getting involved?

A number of things could be the cause of students not getting involved on campus. Tugas said students may not get involved due to the difficulty transitioning from high school to a university.

“We find that a lot of students, their freshman year, choose not to get involved and that’s OK. They are still adjusting. They are still trying to figure everything out,” Tugas said.

Another reason that students are not getting involved may be because they are nontraditional students, Tugas said. Students who fall outside of the 18-22 age range may have families they need to take care of or may have a job. Transfer students may not feel at home at UNCA. Students who live off campus may find it difficult to engage with the campus community because they do not live within it.

“It is much easier for us to capture the on-campus residential student because they are a part of a larger campus community,” Tugas said.

Elizabeth Berkeley, management student at UNCA, said she thinks some students do not get involved because they do not feel UNCA has an organization that focuses on what they are passionate about.

“Every student should get involved in something. There are so many organizations on this campus that have something for everyone. If there is not an organization for something you are passionate toward then it is pretty easy to start one of your own,” Berkeley said. 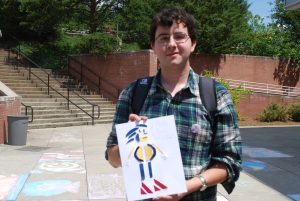 Getting involved on campus can provide students with unique opportunities to gain personal experiences and professional skills according to Lauren Bulla, former UP Acts and Performances committee director. .

“Student involvement is an incredible way to grow not only as a leader but as a learner, because getting involved stretches our capacity to engage with new ideas and interpretations of the world around us,” Bulla said.

Bulla  said by getting involved with a campus community, students get the chance to support their campus and uncover new passions.

“We are looking to bring on a co-curricular transcript that will complement a student’s academic transcript,” Tugas said. “It will outline their involvement on campus, their volunteerism and some leadership development programs they attended.”

Virginia Taylor, a junior at UNCA, performs with The Fortisimamas. Through being involved with the group, Taylor formed a bond with the girls and realized she could lean on them when she needed support.

“I’m so happy I joined an on-campus activity, because I think it really made my freshman experience one to remember,” Taylor said.

Activities put on by student organizations provide students with a break from schoolwork and create a fun environment for students to hang out with their peers. Getting involved allows students to get to know others on their campus who share the same interests as them Alex Schneider, SGA sophomore senator, said.

“Getting involved makes it easier to keep track of everything that needs to get done since sudents get a break from studying and schoolwork,” Schneider said.

By being involved with a campus community, a student can better enjoy their college experience and have fun.

“Student involvement is an essential part to this campus. Through being involved, students are able to learn many things that they would not be able to through their academic classes,” Beikmohamadi said.