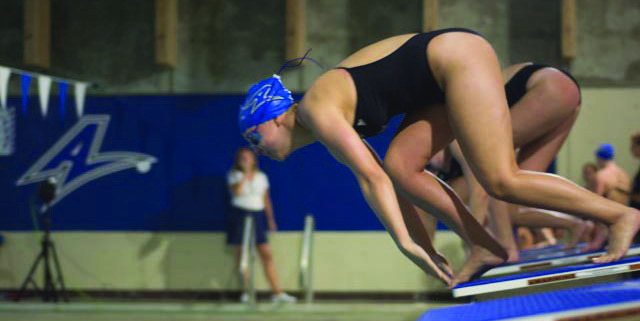 The start of women’s swimming season at UNC Asheville began on Friday with a team divided, but only in the pool, Ale Sanchez said.

“It was amazing watching the team cheer for each other regardless of the team they were on,” said Sanchez, a sophomore.

UNCA’s swim coach, Elizabeth Lykins said she is proud of the newcomers on the team.

“I am excited to see our freshmen get their first taste of collegiate swimming,” Lykins said.

Lykins said the Blue team kicked off the meet with a win in the 200 Medley Relay by Reid Jackson, Alessandra Troncoso, Emily Werth and Elizabeth Murray.

The second race resulted in a win for the White team by Galen Broido in the 500 Free, but the Blue team took second through fourth place, leaving the score close at 10-9.

The score remained close until Sanchez won the 200 Fly and the 200 Back during the middle of the meet, allowing the White team to take the lead and never look back.

Freshman Morgan Rulevich won the 200 breast, 100 Free and 100 Breast. Lykins said she ended the meet with another win in the 800 Freestyle Relay.

A number of other swimmers also placed first according to Lykins, including Alexandra van Dorsten, Stephanie Smith, Rachel Van Noordt and Jessica Woolfe.

Lykins said she is happy with the progress the team has made in five short weeks.

“They are starting to learn to apply the stroke improvements we practice daily to their racing,” she said. “The entire team is working well together and learning to race.”

Sanchez said this meet goes to show all the hard work we put into every practice.

“The future is looking bright for the Bulldogs,” she said.