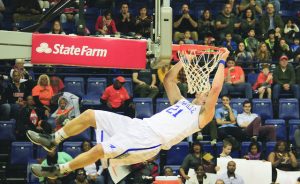 The Bulldogs stormed back from an early 16-point deficit against the Campbell University Camels, going on a 20-0 run that stretched from the first half into the second to secure the win.

“Two things we focused on in practice were limiting turnovers and out-rebounding them. Early, I thought we had way too many turnovers. We had four by the first media timeout and that led to their lead,” said Nick McDevitt, Bulldogs coach. “We were getting out rebounded at one point 12-8. We ended up out-rebounding them by 6. We started taking better care of the basketball and that’s when we got back in the game.”

Giacomo Zilli sparked the Bulldog’s run with a lay-up on the offensive end, followed by a steal he took the length of the court for a two-handed jam.

“Our energy level changed. That was the biggest thing. We started to defend them. I think our team fed off Giacomo Zilli’s dunk. When he got the steal and put the ball in the basket, it brought some life to the building,” McDevitt said. “The fans really got into it. We weren’t playing well and the fans didn’t have a whole lot to cheer about. Seeing a great kid make a play like that, I was so happy for him, but happy more so because it gave us a jolt of energy and we played well from there.”

The Bulldogs ended the first half on a 13-0 run to go into halftime down by 3.

“We started out flat and we knew it was something that we had to control. We started playing harder and focusing on defense more and getting stops. That turned over to our offensive side,” said Andrew Rowsey, Bulldogs guard.

The Bulldogs stretched the lead to 18, capping off a 38-4 run, but the Camels did not go away quietly.

Campbell went on a 16-5 run to pull it to 7 with 6:57 remaining in the game. For the next 5 minutes, both teams traded baskets with Campbell finding a slight edge to pull within 2 points with one minute remaining.

Asheville scored the final 5 points of the game to pick up the win, 70-63.

“Campbell runs a pretty nifty offense. They do a lot of backdoor cuts trying to get threes. We just had to stay with our guy and not let them get those backdoor cuts,” Rowsey said. “We did a great job it felt like.”