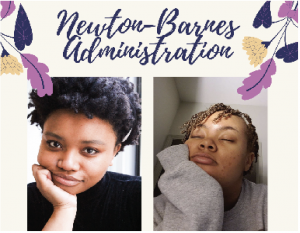 I remember the first time I truly saw SGA president London Newton. It was September of last year, still blazing hot. I stood among the largest crowd I had been a part of since before the year began. She sat on the stairs leading up to Ramsey Library, speaking through a megaphone to a crowd of students, faculty, staff and locals. It was just weeks after Jacob Blake had been shot seven times in the back by Kenosha police officers in Wisconsin, his children witnessing the unjust violence from the back seat of their SUV.

UNC Asheville athletics joined with university officials and the student body to organize the rally in opposition of violence and injustice committed against Black people. As a sizable crowd drew on the quad, UNCA athletes, staff and officials began making incredible speeches but it was London, sitting on the stairs, speaking with such raw and authentic conviction, that stirred me to emotion.

I remember her saying she was tired, tired of seeing the same harrowing injustices committed against Black and brown people with nothing truly done to prevent the cycle from happening again. Tired of UNCA students claiming to be anti-racist and progressive but not showing up for Black students on campus. Newton did not hold back her true feelings as she spoke on those stairs: she was angry, hurt and weary. It was in that moment I realized just how powerful she was, her strength seeping out through the honest and uninhibited speech.

She led the crowd to march a loop around the campus that day in honor of the Black people murdered at the hands of racist police and unconscionable hate, chanting a demand for change.

Spring of 2020, the pandemic hit the Asheville area and students retreated back to their home cities and towns, mine being a rural area an hour east. From there, I watched London’s leadership over the summer of 2020, not only for the University, but the whole city of Asheville from the privileged comfort of my smartphone and social media feeds.

I saw her efforts in organizing the Black Liberation Celebration last July and watched the SGA executive of student advocacy, Sean Miller tearfully recount the extreme brutality of the Asheville police department while she was serving as a medic at the Black Lives Matter protests. Following this event, London helped start up Asheville for Justice, a group that educates on important topics and pools funds for mutual aid efforts — and Asheville for Justice continues with the same passion to advocate, educate and fund marginalized and oppressed folks in the Western North Carolina community today.

Upon the return to campus this past fall, there is no doubt in my mind that London was tired as she spoke to the crowd on the quad on September 4, she was already carrying the weight of leadership in an unforeseen year where the worst parts of humanity reared its head. But London did not stop.

Throughout the academic year, the Newton-Barnes administration made it clear they are willing to put in the work for UNCA students. The beautiful Black Lives Matter mural spanning across University Heights was hand-painted by student artists on September 30 and organized by students, Newton being one of them.

After the threat was made against UNCA on October 9 in response to the mural causing a campus wide shelter in place order from 7:30 a.m. to 7:00 p.m., Newton, along with university officials organized campus wide conversations to process the events which took place and move forward. Additionally, London advised the student body to rest as a form of resistance on November 3, due to the surmounting anxiety, fear and unrest surrounding the election date.

It is obvious London has spent time as student body president pouring the most honest form of care and nurture into her work for her fellow UNCA students. From organizing safe spaces for BIPOC students, educating the campus community on stigmas in the greater Asheville area and working closely with university officials to ensure students maintain their rights, she has relentlessly cared for this campus and it’s community during an unprecedented year.

This care did not go unnoticed by me, a fellow member of the student body, nor by Campus Compact of North Carolina. Newton was awarded the Community Impact Student Award by the North Carolina organization because she has proved her commitment to partnering with our community, inspired fellow students and has surmounting evidence of the impact of her hard work.

So why could Chancellor Cable not show up to the inauguration of the new SGA staff on March 24 to, at the very least, thank London for everything she has done?

London Newton is owed so much more than that.

UNCA has gained increased publicity because of the work Newton has done during her stint as SGA president. Not only that, but she has done invaluable work to begin conversations and methodology for active anti-racism and inclusivity on this campus.

When I reached out to the Chancellor’s office for better clarity on why Chancellor Cable could not be at the inauguration in honor of London’s efforts, I was met with a “we will be in touch” email which has since gone untouched.

This cannot be our legacy: broken promises and a lack of gratitude.

UNCA students, staff, faculty and administration must continue to do the work put in place by the Newton-Barnes administration. The Chancellor, the leader of this university, must have an active plan to work toward anti-racism on this campus and follow the model provided by Newton.

London Newton, there is not a feasible way for this campus to show the immense gratitude we owe you, but on behalf of the student body you ardently served this year, thank you.