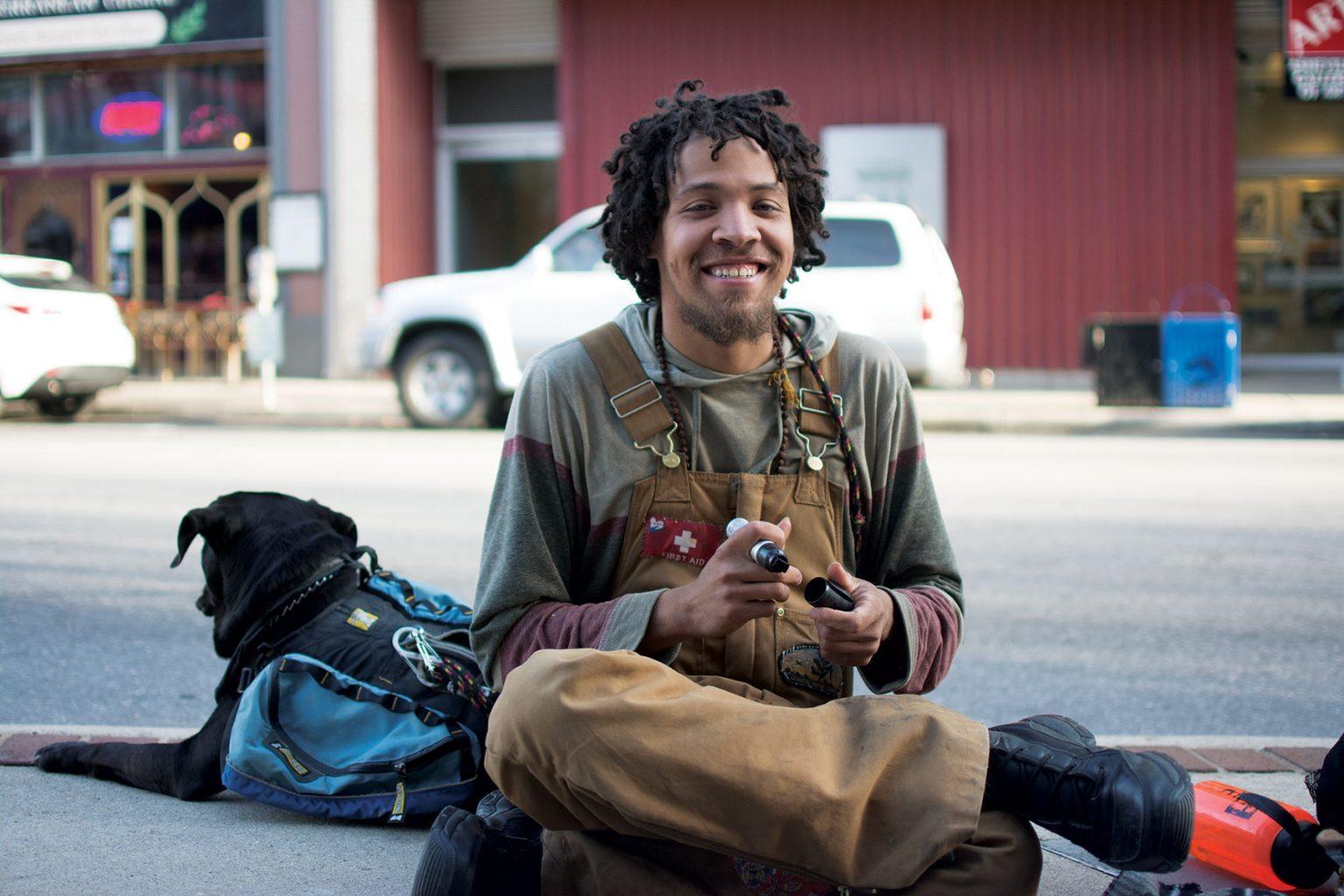 So what are you doing out here today? Just sitting and reading people’s fortunes?

“Mostly. I was about to do a sign that said ‘push-ups.’ It would help me get in shape as well.”

How long have you been reading tarot cards?

What made you want to do that?

“A mentor of mine picked up a deck of playing cards, did a reading for me and put them away and didn’t touch them again. So, that’s when I started. It just takes time.”

How would you describe your style?

What are you doing in Asheville?

What would you describe the craziest place that you’ve visited as being?

“Craziest place. Well, it depends. Everywhere’s a little crazy. I’ve been through some experiences everywhere. I’ve been almost assaulted on the side of the road, just different things.”

What inspires you creatively, would you say?

“People telling me that I can’t do something. That’s a really good inspiration.”

What made you want to hit the road?

Have you ever ridden trains before?

“It’s like another ride. You just gotta trust yourself.”

Yeah. And if you were to describe yourself in one sentence, what would you say?

Do you have a personal motto that you live by day-to-day?

“Ummm, I think I just said it. What is it? My greatest pleasure in life is doing things that others say you can’t.”

“I like the openness, but I’ve experienced a bit of racism, so, yeah.”

Yeah. There’s definitely that element around for sure.

“I lived in Florida for 20 years, 25 years, and I worked for the city bus company as a customer service rep., so I did that kind of work, customer service, and I’ve been up here eight years now.”

What made you want to move to Asheville?

“My daughter. She promised me a grandchild, so I said OK.”

How would you describe your style?

No, it’s a little different.

“Yeah? Well, I’d like to be thinner for one thing, and it’s hard to lose weight when you’re older, so keep that in mind now. On my style, it’s kind of a little hippie, because I grew up in a hippie era.”

“I’ve seen the Grateful Dead a few times in Miami.”

Oh wow. Did you see Jim Morrison or anyone like that?

Her son, Curt Nelson, interjects : “Oh, Miami’s fun! I grew up there! The ‘80s? Girlfriend! I came out of the closet. I was hanging from the rafters, the 23rd floor at the Seagull Hotel, on a roof.”

Betty: “People were different in Miami in the ‘70s. There were a lot of people that were born and raised there. Today, you don’t see a lot of that. You see a lot of people from all over the world and a lot of them fight with one another. They think that one group is better than the other and there’s frictions, which I don’t like. Then we moved to Orlando and we were there. We left there one year prior to that hurricane, Andrew.”

You like jewelry. Is this something you’ve cultivated over the years or is it a new-found obsession with you?

What would you describe your favorite stone as being?

“Well, this is actually in the line of blue, this stone. This is relatively new. This is from Italy. This is very traditional. They make this out of caulk.”

Have you traveled a lot?

“I’ve been around. When I left Wisconsin, we went to Florida, then we went to–let me think. We’ve been a few places. Now I’m trying to think. I lost my train of thought. The mountains. Not these mountains, the other ones up north.”

“No. They’re called the Appalachians also and Topeka, Kansas–very flat, lot of tornadoes. I mean, tornadoes, really, the sirens go off and you’ve gotta run. I go, ‘Run where?’ Let’s see where else. Detroit. I didn’t care for Detroit that much. I know it’s a lot of worse now. Illinois, Chicago. Just a lot of places.”

What would you say your favorite place was?

“Miami. When I was 22 years old, I left Wisconsin. I couldn’t take the cold there. You’re right off Lake Michigan, and it got down to 20 below zero, and that wind would cut you in half. I’ve been in a lot of different states, you know, Tennessee. Tennessee is beautiful. It’s like Asheville, but they’ve got bigger mountains.”

Yeah, it’s really pretty. What would you say in terms of creative inspiration, like art, music, film, literature, inspires you?

“I like reading about things. I don’t like books like storybooks or novels. I like learning, science books, history, space. I’m interested in that. I’m interested in art, you know? I was going to learn how to make jewelry, but, ah. Every place you go they want an arm and a leg. I can do some of it. But I really never got into it. I HAVE a lot of jewelry. No, in my house, I’ve got enough jewelry to open a store and not all of it is, a lot of it is old, you know? A few years ago when they made costume jewelry, it was real. It last. It was considered an antique. Today, it’s not an antique. Today, it’s like crap, you know?”

Yeah, it’s a lot of cheap junk. Do you have a personal motto that you live by?

“Just live for today. That’s all we got is today.”

Her son interjects: “Yeah, Miami don’t have that!”

Betty: “The people are more friendly here than Miami. I remember when I first moved to Miami, they were not friendly. They are not friendly in Miami. They walk right by you and they don’t say hi or nothin.’ The thing I don’t like is I feel bad for the homeless people that’s down here. They lay down on the streets in the cold, women, men and some children. I don’t like that. I think the city should do more for the homeless, not just feed them. They do feed them. But as far as shelter, they need, you know, there are a lot of people here who are on heavy drugs and a lot of cities, what they’re doing is these people who are on all these hard drugs are picking them up and putting them into a rehab, rather than putting them in jail. Putting them in jail doesn’t help. They get out and they go right back. But if they put ‘em in rehab, then they have a chance to rehabilitate.”