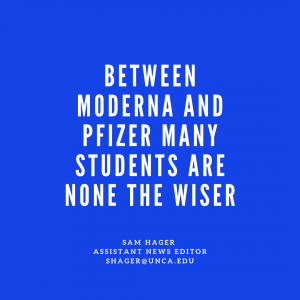 From microchips to mind control, misinformation abounds concerning the current COVID-19 vaccines. According to Channing Neorr, a sophomore and religious studies major at UNC Asheville, it’s almost impossible to sift through the lies surrounding the vaccine.

“I try to steer clear of all of it because I know it’s biased in some way. I feel this weird detachment like I don’t even want to look because I don’t know what the truth is at the end of the day,” she said.

There are other reasons that students might not actively seek out information concerning the vaccines, according to Neorr. For her, the conversation simply hadn’t come up.

“I feel safe. I don’t really think about it,” she said. “That’s also because of my health and my demographic. I don’t feel that same fear that a lot of  people do especially because I don’t live with anyone older.”

Jay Cutspec, the director of Health and Counseling at UNCA, said misinformation is only part of the issue with the vaccines.

“The vaccine situation in our country is a mess. Despite what we were told, operation Warp Speed was not a very well organized effort,” he said.

According to the U.S. Defense Department’s website, operation Warp Speed aims to combine the private and federal sectors in an effort to expedite production and dispersion of vaccines. However, Cutspec said he remains unimpressed.

“Part of it is we’re playing catchup with not only distributing vaccines but getting them from the warehouse to peoples’ arms,” he said. “There’s not necessarily fairness or equal distribution as people see that it should be.”

Despite frustrations with distribution, Cutspec said the mere fact that we have a vaccine is incredible.

“Not only did we have the best scientists working on it but we had a huge amount of resources which is how they were allowed to develop these vaccines so quickly,” he said.

According to Cutspec, both the Pfizer and Moderna vaccines prove effective while more vaccines begin their development in the background. In fact, students may benefit from waiting in order to receive a more updated vaccine later on, he said.

“There may be some benefit to waiting. You may get a more effective vaccine or the vaccine may match the virus a little closer depending on what’s out there. We’re just going to have to wait and see how this evolves over the next couple of months,” he said.

According to Cutspec, the research he’s seen shows a near 70 percent rate of immunization for the upcoming single-dose vaccine by Johnson & Johnson while the Moderna and Pfizer statistics are closer to 90 percent effective. Though these statistics are exciting, Cutspec said students should try to stay informed as more research becomes available.

Samantha Desotelle works at First Resource Center as a drug support professional. Her position pushed her up a few phases, allowing her to get her first dose of the Pfizer vaccine on Feb. 8.

“It felt like a small, tiny bit of metal was jabbed into my arm. I wonder if it was the chip– the microchip– I hope it has bluetooth,” she said, joking about the conspiratorial thinking surrounding the vaccine.

Desotelle said most people don’t have an issue with the first dose of the Pfizer vaccine, it’s the second round that causes trouble.

“I haven’t heard of any adverse reactions with the first one. Most people are always talking about the second one,” she said. “The second one is supposedly a lot worse.”

According to Neorr, her mother experienced these adverse effects firsthand.

“She said she just had her second round and she woke up and had a really bad fever and just didn’t feel good. I didn’t want to freak her out but it made me kind of nervous,” she said.

While anecdotes like these sow confusion and concern, Cutspec said the only way to know the truth is to seek it out.

“Education is key. Facts are key. We live in a culture where fact and fiction are all tangled up,” he said.

For students searching for the quickest way to get a vaccine, there’s not much they can do, Cutspec said. According to him, distribution is based on several different factors such as which county you reside in.

“So, if you live in a rural county, staying in touch with that county and seeing which phase of distribution they’re in. That’s the most important thing, and probably the only thing that they can do,” he said.

According to Cutspec, students belong to the second-to-last phase of distribution, meaning they might not see the vaccine for some time.

However, once you get the vaccine you aren’t out of the woods yet, according to Desotelle.

“When people get the vaccine, that doesn’t mean that it’s okay for them to go to the store and start not wearing their mask. You still have to wear your mask because they’re unsure if it essentially turns that person from someone who has a reaction to COVID-19 into someone who is more asymptomatic,” she said.

For students wary of zombification, microchips or worse, Desotelle said to take a step back and consider the facts.

“I’ve swam in the French Broad, that’s why I’m not afraid of the vaccine,” she said. “I think the true worst thing that can happen is that your chip doesn’t have wifi.”

Asheville increases budget for the homeless