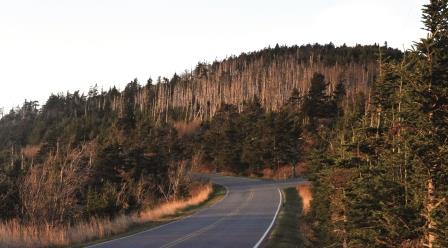 When driving on the Blue Ridge Parkway, the view is of endless mountains covered with countless trees. But upon rising in elevation, the normally green forest canopy becomes interspersed with patches of gray, dead trees.

One example is the road leading up to Mount Mitchell. Each turn on the winding road reveals a new patch of lifeless, bare trunks. Up to 90 percent of these trees are dying as a result of a combination of acid rain and a microscopic non-native invasive pest, the balsam wooly adelgid.

Acid rain, or acid deposition, occurs when chemicals like nitrogen oxide and sulfur, released by burning coal, combine with the water in clouds and precipitation.

“The acid is in not just rain but snow and fog and mist. It even falls dry out of the atmosphere,” said Irene Rossell, environmental studies professor at UNC Asheville. “So you have a combination of some corrosive impacts on the needles, but the changes in the nutrients in the soil make it harder for the plants to live there, and it changes the shape of the roots. The root hairs are not as nice and slim, they become kind of club-shaped. It’s harder for them to absorb water and nutrients.”

The clouds at the top of Mount Mitchell can reach the acidity of vinegar, according to North Carolina State Parks data. These acids leach important nutrients like calcium from the soil and increase the presence of aluminum, which is toxic to plants in high levels, Rossell said.

The trees at this elevation are especially vulnerable due to their dependence on cloud coverage for the majority of their moisture. Climate change also plays a major role, said Andrew Laughlin, an environmental studies lecturer at UNCA.

“Climate change is causing the cloud cover to move up slope. Average cloud coverage altitudes are actually 30 feet higher now than they were decades ago because of warming,” Laughlin said. “So these mountain-top forests are retreating up the mountain and eventually there’s going to be nowhere for them to go.”

The spruce trees are affected the most by the acid deposition, Rossel said, but the Frasier firs are also suffering due to the effects of the adelgid.

“They are sucking insects. They stay on the surface, but they get into nooks and crannies on the bark,” Rossell said. “They have this long proboscis and they insert it into the vascular system of the tree, they can even insert it through the bark of the tree.”

Rossell said the insect feeds on the carbohydrates in the tissue of the tree, disrupting the flow of nutrients so the tree can’t feed itself and slowly dies.

It is important to protect the Southern Appalachian Spruce-Fir forests as they are one of the top two most threatened ecosystems in North America. The forest at the peak of Mount Mitchell is an example of a boreal forest, which typically exists at more northern latitudes such as northern Canada, Siberia and northern Europe, Laughlin said.

“It’s a biome, it’s a forest type that is dominated by firs and spruce trees. And the reason we have them here down in North Carolina is interesting, the last ice age when there was ice pack covering north America these boreal forests were pushed down into southeastern United States,” Laughlin said. “And when the ice retreated 10 or 12,000 years ago, retreated back north, the forests moved back with them. Except some of them retreated up the mountain slopes of North Carolina, Virginia and Tennessee. So we’ve got these high elevation islands of boreal forest.”

Without the forests, Laughlin said, animals who depend on this ecosystem, such as the northern flying squirrel, the saw-whet owl and the endangered spruce-fir moss spider, will have nowhere to live.

It is not only the boreal forests that are affected. On other parts of the mountain range, the hemlock trees are affected by an insect of a similar species, the hemlock wooly adelgid. Albert “Bud” Mayfield, a research entomologist who specializes in this adelgid, said the two species are very similar in the way they infect trees.

“The hemlock adelgid comes from the Osaka region of Japan and it has been in the U.S. since the ’50s, at least,” Mayfield said. “It was probably introduced earlier than that and likely from Japanese hemlock seedlings that were shipped from Japan.”

Mayfield has been working on a number of ways to decrease the population of adelgids. A temporary solution is Imidacloprid, a systemic pesticide absorbed by the trees’ roots and carried through their vascular systems.

“That compound can provide five or more years of protection of an individual tree. But you have to treat on a tree-by-tree basis. And when you have thousands of trees you are trying to protect it’s a very difficult and expensive way,” Mayfield said. “If you had all the money and all the time you still couldn’t treat all the trees.”

A long term solution is biological control. Adelgids are so populous because they have no natural predator here, where they are non-native. Releasing predators of the adelgid could help control the population and prevent further deaths of hemlocks, Mayfield said.

“The one that has shown the most promise and widespread establishment is call laricobius nigrinus. That beetle is native to the pacific northwest,” Mayfield said. “There’s another, laricobius osakensis, that is native to the Osaka region and that one is more recently introduced. Most recently we have released some silver flies from the pacific northwest.”

Another possible solution is breeding the trees with a tree of a similar species that has a natural resistance to the pest. Although the American Hemlock does not breed well with its Japanese counterpart, the option may still be a possibility for the Frasier Fir, Mayfield said.

Laughlin said this process was utilized to save the American chestnut, which was once one of the most dominant trees in eastern America, until a non-native fungus from Chinese chestnuts practically wiped out the population

“It used to be the most dominant source of food for a lot of wildlife and now you are lucky to find a sapling. They just don’t exist anymore. What scientists have done is start breeding the American chestnut with the Chinese chestnut,” Laughlin said. “So, they’ve developed this tree that is 15/16 American chestnut and 1/16 Chinese chestnut. It seems to be resistant, their idea is to reintroduce it to the forest again.”

Even if these efforts are successful, there is no guarantee the forests would return to the way they were before. Without the hemlocks providing shade, the microclimate has changed. Yellow poplar, red maple and rhododendrons are replacing them, Mayfield said.

Similarly, without the thick canopy provided by spruce and fir, the soil and moss at the top of Mount Mitchell are drying out in the sunlight. Blackberry bushes and other early successional plants are replacing the trees, Rossell said.

Another issue is money. Pesticides are expensive and so is biological research, said Mayfield, whose research is funded by federal grants.

“The challenge with that is that there is always new non-native invasive pests coming on the scene, almost continually,” Mayfield said. “The number of problems that have to be addressed have a static or steadily decreasing funding.”

Rossell said the funding for her doctorate  research on acid deposition was pulled halfway through the grant cycle, causing her to have to scramble to finish.

“Our grant actually came from a power company and people are always mad at power companies, ‘You’re causing acid deposition, so you’d better fund research on it.’ Then, all of a sudden, people were saying, ‘By the way, you’re also causing global warming and so you’d better do something about that,’” Rossell said. “So they were probably thinking, ‘OK, we funded acid rain for ten years now it’s time to fund global warming.’ It’s a PR issue. Granting agencies are very responsive to what is good for them politically.”

The state parks themselves also have to deal with a decreasing budget. Governor McCrory’s proposed budget suggests a budget cut of $3.3 billion for 2016 and a $7.1 billion cut in 2017.

“If they are trying to manage these ecosystems that are under so many threats on a shoestring budget obviously that’s not going to be good enough,” Laughlin said. “You need basic research on the problems in the first place and then implementing that research takes more money and resources. I’d say that it’s very difficult on a budget that keeps getting slashed.”

N.C. law requires marijuana grown in state to be taxed

Organizations raise awareness about men as victims of sexual assault 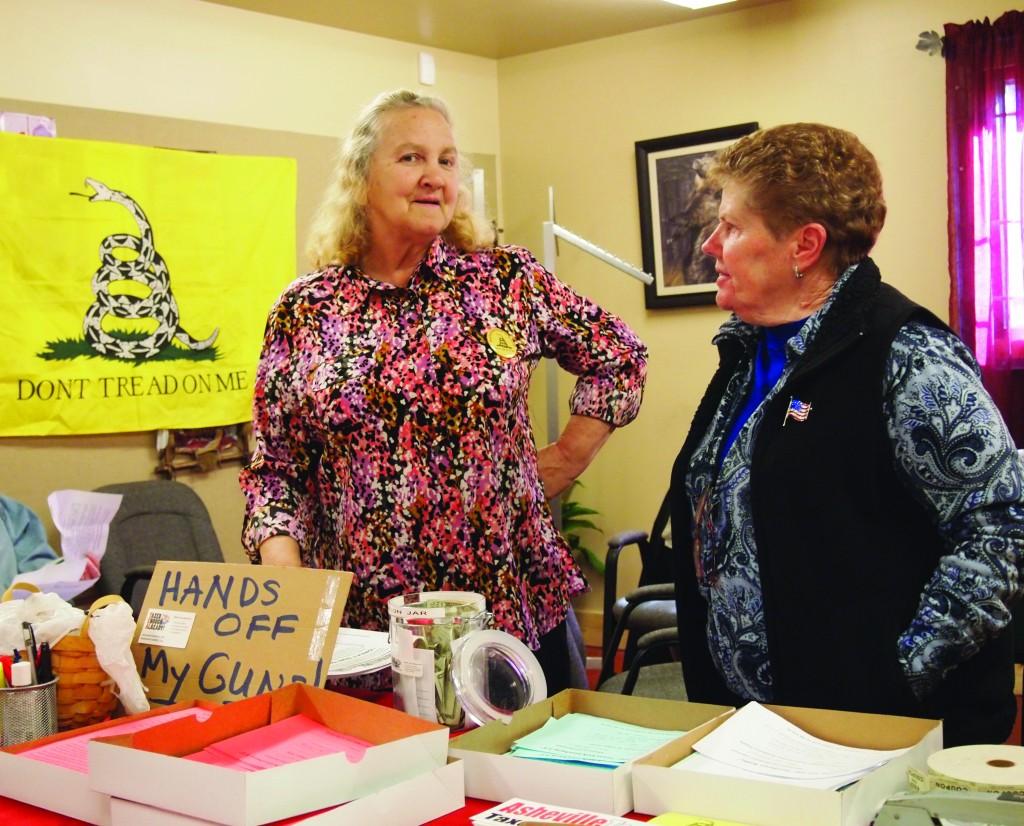