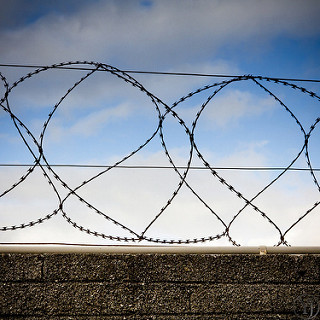 With a shaky voice and tears in her eyes, Kristine Bunch takes a deep breath and begins to tell the audience about the 17 years stolen from her by the wrongful conviction of the murder of her 3-year-old son.

Bunch told her story to a UNC Asheville audience on Thursday in the Humanities Lecture Hall.

On the morning of June 3, 1995 Bunch woke up to her room being taken over by smoke and her son’s room engulfed by fire. Bunch attempted to smother the fire at the floor of his door with pillows and blankets, all which melted instantly.

Without any other options, Bunch attempted to get into her son’s room through the outside window. Neighbors then stopped her from climbing in through the broken window and told her she had to wait for the ambulance to arrive. It was too late.

“When my neighbor and my — for all intents and purposes — adoptive dad got into the ambulance I said, ‘Did you find him?’ That statement was used against me over and over again,” Bunch said. “Because they said that, right there, told them that I knew he was dead.”

Bunch received the news about her son’s death from her father when she arrived to the hospital.

“Before that had even really gotten out of his mouth I had sheriffs in there talking to me,” Bunch said. “They said that they were looking at this as an arson. It was 30 minutes after the fire had been put out.”

When Bunch was admitted to her room, the hospital gave her oxygen but she said she never received testing for carbon monoxide or smoke inhalation.

“Most of my eyelashes and eyebrows were gone and I had burns across my cheeks and most of my hair was singed off. I had cuts on my feet and hands from trying to get in through the glass and running through rocks and glass,” Bunch said. “But that wasn’t enough for them, I didn’t do enough. If I died in there or I had come out disabled, then I would’ve done enough.”

Bunch’s immediate actions after the fire would follow her throughout her entire trial. Bunch said the investigators never attempted to understand her reaction to a traumatic event and they immediately focused on the cause.

“It was just a year prior, Susan Smith had killed her children and that created a firestorm that women would do horrible things,” Bunch said. “Women are being looked at in a brand new light.”

Only two hours after the fire, detectives began to question Bunch about her friends, family and coworkers because everyone was now a suspect. The detectives believed someone intentionally poured gasoline in Bunch’s house and set it on fire, with the expectation that both her and her son would not live through it.

“At that moment, in my darkest time, you took every single support person or person I could lean on and you made them into something ugly in my mind,” Bunch said.

Around 11 p.m. on the night of the fire, Bunch was taken into questioning. The detectives asked if she had any reason to not want her son. Furious at their accusations, Bunch left the police station. The day following the interrogation, Bunch and her family planned her son’s funeral as the police followed her every move.

“The next day we had my baby’s funeral, and the police attended and they took notes,” Bunch said. “They said if I wanted them to leave me alone all I had to do was take a polygraph.”

The day after her son’s funeral, Bunch took a polygraph. During this polygraph she said the detective accused Bunch of lying and said he knew she did this. Bunch was charged with arson and felony murder on July 6, 1995, following the polygraph. The prosecutors case relied on gasoline being found at the house and when discovery came back that there was in fact no gasoline found, Bunch’s judge allowed bail.

Bunch spent the next few weeks mourning her son through partying and numbing herself from the pain.

“Clearly, I didn’t care if I never woke up again,” Bunch said. “I drank and anybody that would give me something to numb it, so I didn’t have to think or feel or focus, I took it. When I met what I thought was a very nice boy who kept me very doped up, I decided I was just going to stay with him.”

After a few weeks with the man Bunch met, she found out she was pregnant. Bunch felt this was an opportunity to clean up her act and a second chance at motherhood.

“All that time I thought God, or whatever higher power I believed in, had punished me and thought that I did something so wrong that he took the only thing that I ever really loved,” Bunch said. “So having this child meant that he had given me what I wanted most, my baby.”

Bunch used her savings to fund her funeral for her child. She did not have the money to hire an attorney so she went into trial with a public defender.

“Every part of me was broken apart and put on display,” Bunch said.

Bunch’s attorney warned against letting the jury and prosecutors believe they were getting to her, he told her not let them see her cry.

“So then I was cold and I was heartless and you didn’t see that it was all I could do to get in the car after the end of the day because you tore me down,” Bunch said.

A forensic analyst with U.S. Bureau of Alcohol, Tobacco and Firearms testified he found a faint trace of kerosene in a circular shape in the wood of Bunch’s living room floor and found a positive sample in Bunch’s son’s room. Bunch said the kerosene found in the living was explained by the previous owner who claimed he had a kerosene heater in there for many years.

“I know most of you want to know if it’s like Orange is the New Black. Yes, very much. Only there is 20 times more rape, violence, setups all those little petty things you see in there, they’re happening on a much grander scale,” Bunch said.

There were five officers at Bunch’s prison who were arrested by the FBI for taking inmates outside the gate of intake and raping them on prison grounds.

“It’s horrible there and the only thing you can do is wallow or rise,” Bunch said. “For me I had a baby and I wasn’t going to leave him out there thinking that I did this horrible thing,” she said.

Bunch began her long fight against the justice system. She worked three of the highest paying jobs in the prison. She earned a bachelor’s degree and several associate’s degrees and certifications. Bunch wrote hundreds of people weekly asking for help toward her case.

Bunch eventually befriended a pregnant inmate who introduced Bunch to her attorney. With the help of her new attorney and a church volunteer, Bunch obtained the help of Northwestern’s Center on Wrongful Convictions in 2007.

“By the time Northwestern came on, I already gotten my medical records, knew they hadn’t tested me for carbon monoxide, I had my son’s autopsy, I knew he died from carbon monoxide poisoning,” Bunch said.

CWC subpoenaed the original ATF file that said nothing was found in the Bunch’s son’s room. The file that was used to convict Bunch was altered and said certain samples came up positive. In 2008 Bunch filed for post-conviction relief which her judge took six months to decide to deny it. Bunch’s legal team then appealed to the appellate court.

“It took almost a year after oral arguments before my case was reversed and remanded for a new trial,” Bunch said.

The courts decided to not to retry Bunch and 17 years after her arrest, she was finally released.

Since her release, Bunch worked with CWC and the Innocence Project. Bunch is an executive director of the organization JustIs 4 JustUs, founded by a fellow exoneree, Juan Rivera. JustIs 4 JustUs aims to help exonerees with tasks from getting identification cards and building resumes or accompanying them to new places to donating free services, according to their website.

“Her story has impact because she lost so much and we are compelled almost, in some way aren’t we, to listen to that and learn from it,” Hickman said.

Hickman found Bunch’s story to be empowering for everyone.

“You are powerful, you have a voice and any small amount of awareness you can bring to a situation that may not seem connected may affect, and likely will affect, change,” Hickman said.

Patrick Bahls, professor of mathematics and director of university honors program at UNCA, found interest in Bunch’s story as well. The interdisciplinary nature of the honors program allows Bahls to partake in issues such as prison reform, criminal justice and urban planning.

“The honors program has an obligation for addressing some of these social issues because if the people in that program are purportedly the best and the brightest that our school has to offer, not only should that come with great opportunities, but that should come with great obligations,” Bahls said.

Bahls said he believes the honors program should be preparing students to be great leaders and Bunch’s story has the opportunity to teach students about humanity.

“It is important to remember we are not that moment in time, even if a person is put in prison for something they really did do, they’re not to be dehumanized, it is not our place to take away their humanity,” Bahls said. “They deserved to be treated as human beings.”

Through her work, Bunch encourages people to understand they have a place in this fight against the justice system.