THIS REVIEW/RECAP CONTAINS SPOILERS FOR THE “FEAR THE WALKING DEAD” PILOT. TURN THE PAGE IF YOU HAVEN’T SEEN IT.

If there were three songs that a soundtrack artist for this show could describe the beginning, middle and end of this interesting first hour of the prequel series to AMC’s The Walking Dead, they would be revived rock anthems.

The first 15 minutes of this episode could be accompanied by Iron Maiden’s “The Number of the Beast,” with our protagonist running into a walker almost immediately after waking up in an abandoned church.

Viewers are introduced to Nick, a Johnny Depp-inspired character, and are then plunged into the world of the undead (known only as “walkers” to this universe). The first five minutes of the episode are set in an abandoned church, viewers later learn was home to, as so casually explained by Nick, a “junkie convention.”

According to Ryan Steinauer, a junior psychology student at UNC Asheville, the show’s pilot was not surprising.

“It was interesting but had a typical progression,” Steinauer said. “It was just like The Walking Dead with a different setting and different people. I hope they don’t take the traditional route with the plot and include more of the people fighting back without the government’s help.”

The first scene of this series conveys this show is not going to be just a medical drama, although most of this pilot takes place next to a hospital bed.

“It was slow in the middle before picking up again at the end,” Steinauer said. “They spent way too much time in the hospital.”

When Nick escapes from the church, and the clutches of his now-dead-turned-walker friend Gloria, he bolts out of the building only to be laid flat in the road by an oncoming car.

The cinematography during the car crash was a bit uninspired, as viewers have seen an escapee running in slow motion out of a building many times before (especially if the building happens to be on fire), but it works here when it’s immediately accompanied by the protagonist being rammed by a vehicle.

This accident brings us to his family, who are forced to come together when Nick is injured.

The central family of this show is typically dysfunctional. The rebellious teenage daughter dislikes her stepfather and, as always, the mother disapproves of her son’s drug-addled behavior.

Madison is the mother of the family and assistant principal at the school where her daughter goes. She walks into the school one morning and the principal has to flag down a student who brought a knife to school.

The viewer comes to find out the student had heard about the impending doom to America and brought it for protection. Madison is skeptical until later in the pilot, when she keeps the knife and sends the student on his way.

Nick explains to his stepfather, Travis, what happened in the church the night before, which prompts Travis to look into the abandoned monastery. Because he’s a stoner, he has been restrained by nurses at the hospital who consider him to be crazy.

The words Nick uttered, something along the lines of “she was eating people,” sparked curiosity in Travis’s mind when Nick explained what happened to Gloria once he woke up at the beginning of the episode.

Rather than do nothing, Travis runs into the burning (albeit, bloody) building to see what’s going on.

Psychology student Steinhauer was impressed with the courage Travis displays.

Upon entering the building, viewers hear classically ominous music heard in mosthorror movies. Travis then uses his detective skills to find out what happened with Nick and his friends the previous evening.

According to Sebastian Pennacchio, a freshman psychology student at UNCA, the anticipation of seeing what will eventually unfold on the show excited him most.

“I loved how fast-paced the music was because it really got me pumped and gave me goosebumps,” Pennacchio said. “Also, the anticipation of the rise of zombies fueled that anticipation.”

Travis encounters blood, guts, and a deranged man who ends up running out of the building at the first sighting of Travis’s flashlight. All signs point to a spooky ending here, Scooby.

According to Hunter Gomes, a sophomore creative writing student at UNCA, the decisions made by some of the characters deteriorated his overall enjoyment of the show.

“If anything, I didn’t like some of the characters’ logic,” Gomes said. “The father goes to investigate that church based on something his son said without calling the police? Then the father brings his wife back to the church and they still don’t call the cops. I would just assume someone would have called the cops by then.”

Travis takes his wife back to the church, where the blood and gore remain. Rather than believing him at the sight of the scene, the mother still remains skeptical about what happened at the church, saying “bad things happen here all the time.”

“I really do not like The Walking Dead, to be honest,” Steinauer said. “I like this show better because it’s sort of realistic and has more connections to our world, rather than Rick waking up and not immediately being killed by zombies.”

There was a nice touch in one scene where Travis is teaching his students about Jack London’s “To Build a Fire” by trying to get one of his students to realize the man-versus-nature theme underlying the story. This scene and the discussion of London’s work brings the themes of both Fear the Walking Dead and The Walking Dead to life.

It is after this scene that we are provided with one of the first jump-scares in the series. Madison goes to check in on the principal of the school, only to find him hunched over in a chair with his back facing the camera.

The music intensifies, and the audience is trained to think he’s turned because he doesn’t respond immediately to Madison. There is nothing to fear, however, as the principal is just evaluating teachers by listening in on the classrooms.

“There were times where they tried to be suspenseful and it didn’t really work,” Steinauer said. “You knew what was going to happen.”

Nick is still sitting in the hospital, only to discover his roommate is undergoing a “code blue,” and needs to be relocated in the medical facility.

Because he was at the church the night before, seeing what could potentially result from the man next to him dying, Nick tries to escape the hospital after one of the nurses is nice enough to take off a single restraint.

In my mind’s eye, Styx’s “Renegade” would be the song playing in the background while we see Nick wander across Los Angeles in the hopes of escaping the ensuing plague.

Of course, Travis and Nick’s mother, Madison, search for him after hearing he’s escaped from the hospital. The search leads them to Calvin, Nick’s best friend, who can’t recall where he’s seen Nick.

While on their search, Travis and his wife get stopped on a highway with traffic building up on an exit off the interstate. Helicopters are flying overhead to illuminate the scene and, rather than getting out and checking to see what’s been going on with the church, Travis just backs up and drives past.

In the next scene, the rebellious teenage daughter, Alicia, and her friends, watch a YouTube video of the incident on the highway and discover that a man was struck by a car on the exit and turned into a “walker” by eating the paramedic resuscitating him.

“If this series is going where I think it is, I think it’s going to be focused heavily on destruction and zombie attacks,” Pennacchio said. “The Walking Dead can have a balance between action and drama, but I want this show to be very action-packed.”

Later, viewers learn Calvin drugged Nick the night before, and both of them have to keep it secret from Nick’s family.

When Nick asks Calvin what he gave him, I jokingly said it was blue meth in reference to  Breaking Bad, which, if I’m not mistaken, started about the same time as the events on this TV show. It’s easy to keep a secret between two people if one of them is (or turns up) dead.

Meanwhile, the audience sees some romance between Alicia and her boyfriend. Their happy romance presumably survives for all of one episode when the boyfriend invites Alicia to Venice Beach and then stands her up, leaving the viewers, like Steinauer, to think maybe he too was bitten and is now a walker.

“I think the boyfriend turned and she just doesn’t know it yet,” Steinauer said. “Maybe her parents will expose her to this new world and she will end up having to kill him.”

Calvin agrees to help Nick get back on his feet, but he has an alternative plan for his friend. The duo stops under a bridge and Calvin pulls out a gun to kill Nick because he believes Nick could blow his cover as a dealer.

Nick fights Calvin and grabs his gun. By shooting Calvin in the chest, Nick not only frees himself from Calvin’s rage but also puts a theory he has had all episode to the test. In Nick’s mind, if Calvin turns into an walker, Nick can finally gain the upper ground and make his parents believe him about Gloria being a cannibal.

Calvin does reanimate after Travis and Madison find Nick. At this point, I was screaming at Nick to shoot Calvin in the head, but again, this isn’t The Walking Dead. The characters here are just learning about the virus and the apocalypse.

This revelation, said Gomes, is what he hopes will cause the fall of the society surrounding the walkers in the wake of the apocalypse.

“From the show, I expect to see how society falls and how the military will try and fail to fight the zombies,” Gomes said. “Also, potentially how families will crumble and hopefully the rebuilding of society as they come to terms with the apocalypse.”

When the walker tries to kill his parents, Nick tries to use their truck twice to run over the walking corpse of Calvin, yet only to discover Calvin is not going to go down easily.

Now immobilized, Calvin lays on the ground and snarls at the trio of Nick, Madison and Travis.

“What the hell is going on?” Madison asks. Travis turns to Madison and, as straight-faced as he can, replies, “I have no idea.”

Gomes said the prequel-series isn’t necessarily based on what’s known about The Walking Dead.

Here and through the end credits, Creedence Clearwater Revival’s “Bad Moon Rising” would have been a fitting choice. According to Pennacchio, this show has the opportunity to be bigger and better than The Walking Dead, even in its first season.

According to the Nielsen ratings, this first episode of the series grabbed more than 10 million viewers when it debuted August 23.

“Honestly, while I was watching this, I felt like it was a completely different show 90 percent of the time,” Pennacchio said. “The few zombie scenes were really graphic and, in the future, I want there to be a lot of blood and gore, just complete chaos and panic while watching the world crumble as the zombies take over.” 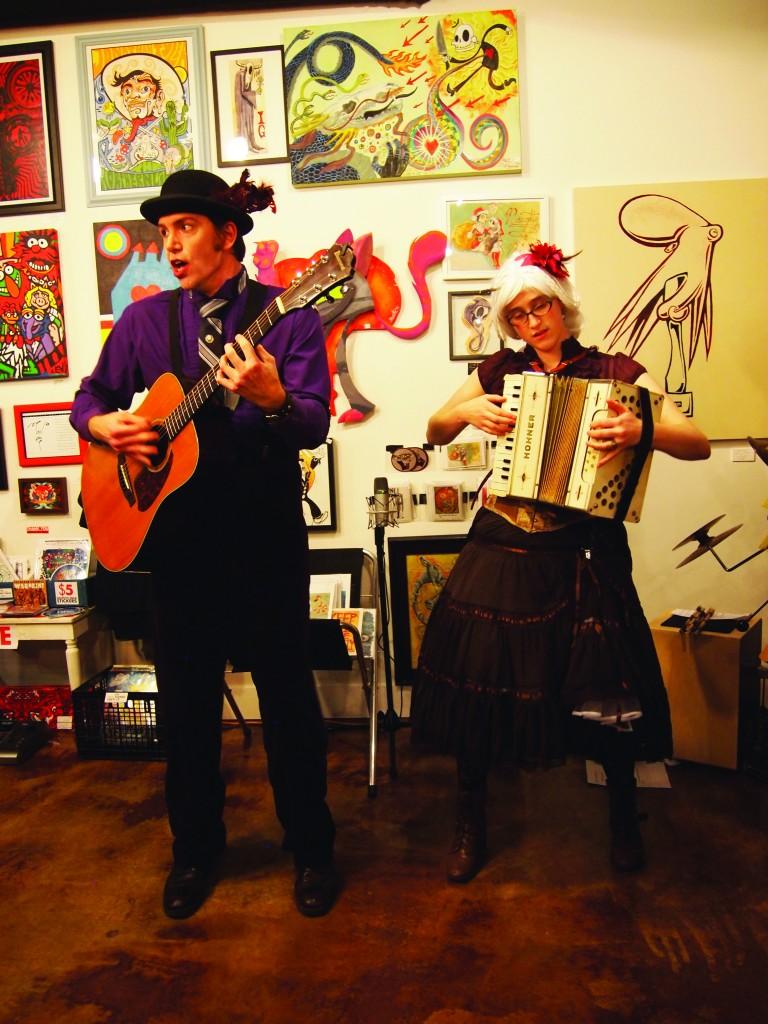