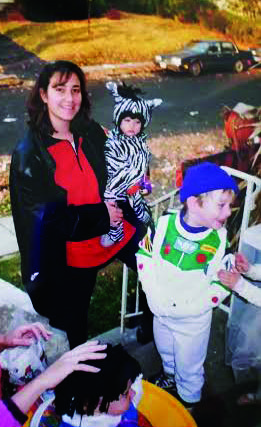 There isn’t always a reason for the way things are.

Frequently, I think we tend to overlook the context behind a situation, and rather find some comfort in living as if everything were simply black-and-white.

I grew up in a town called Cresskill, New Jersey.

When I was quite young, I didn’t remember my father being home much. He would work long hours and then come home shortly before we went to bed.

My mother chose to stay home to raise my sister and me, and the older I get, the happier I am she made that decision.
I don’t think I’d have the same personality if she had chosen to return to work.

As I climbed higher up the elementary school food chain, my father was around more.

My earliest memory of financial issues permeated our household when I was around seven or eight years old.

I remember falling to the ground and sobbing, I mean, really bawling and carrying on, as many kids did when their wishes weren’t flawlessly fulfilled.

American culture does a great job of painting our parents as these wish-granting figures when we’re young.

I was freaking out at my mom because we didn’t rejoin the town pool. It was more money than it was worth for us to buy three or four passes.

I didn’t know how expensive a pool pass could be at my age, I just knew I’d be one of the only kids who wouldn’t be doing much swimming that summer.

You see, I loved to swim when I was little, and in the summer, almost every kid I went to school with could be found at the town pool.

It was kind of a place for kids to keep in touch between school years, and it really frightened me to not have that at my disposal. How would I maintain any sort of friendships I’d built?

Fast-forward a bit to age nine. We had to shower at my grandma’s one night.

I remember piling into the car and saying it was dumb to drive all the way over to grandma’s house to use something we had at our house.

I was too young to realize our water had been turned off.

All of a sudden, at age 12, I’m being teased for the way my clothes look in school because I guess I wore a fair bit of hand-me-downs.

I remember coming home and again, bursting into tears, tearing into my mom because we didn’t have money for me to look cool enough for kids at school to leave me alone.

Then came the age of the flip-phone and I was handed a Virgin Mobile hand-grenade instead.

Kids at school thought it was hilarious, me walking around with the word “Virgin” on my phone, and that was something that went on for the next three or four years.

That was always something my sister and I were teased about a lot growing up — not having the ludicrously expensive, slightly less hideous Verizon models.

I was nearing an age where I could, at the very least, wrap my head around how finances worked in the world, and that’s when the teasing really started to feel shitty.

It wasn’t just kids who were making fun of me — that would have been fine — it became this micro-exchange of my peers making me feel like my parents were inferior to theirs.

And I suspect that said more about society than it did about those particular children.

It turned me into a beast at home, constantly reliving this cycle of materialistic ideals.

As I aged, the teasing got more and more ferocious, kids started making fun of me when my shoes looked too old, when I didn’t get the new video-game console, the new phone, the new trend of the season.

And that turned situations where I was teased for not “keeping up with Joneses” effectively enough into this damaging, pack-mentality driven defense system for me.

I would come home from school, and I’d be so mad at my parents for the criticism they’d received in their absence.

I was stuck in this vicious cycle of getting hit with two waves of embarrassment.

I was too young to understand that a lot of my peers were focused on things they owned because their home life was in the middle of utter chaos.

I didn’t really understand how many of my friends with the new Nintendo DS or phone were often being handed a distraction from the divorce unfolding in front of them every night.

And that didn’t mean all my wealthy friends had shitty home-lives — they didn’t.

But I knew it was a hell of a lot easier to give a kid a present they just saw in the TV ad than to explain as a parent why you no longer loved their father.

When I was 14, my parents had to sell our house. We couldn’t afford to stay in New Jersey anymore.

That was the feather that broke the camel’s back for me.

For years after, I threw the fact that money had kicked us out of our hometown in my parents’ faces where and whenever I saw an opportunity.

How could they do this to me? How could they consciously decide to have kids and then have to cash in our house to keep on going? Who was steering this ship?

I never thought about how it must have felt for my parents, selling the house they’d lived in since their marriage, the place they’d lived for nearly two damn decades.

I could go on and on about how money has influenced my reality, how I’ve vindictively put my parents down for not being able to throw money at my problems, but I think I’ve finally figured out how to say what I’ve been trying to this entire time:

I’m 20 years old, and there are things I’ve said on Christmas that have put tears in my mother’s eyes. And I’ll never get a chance to take any of it back.