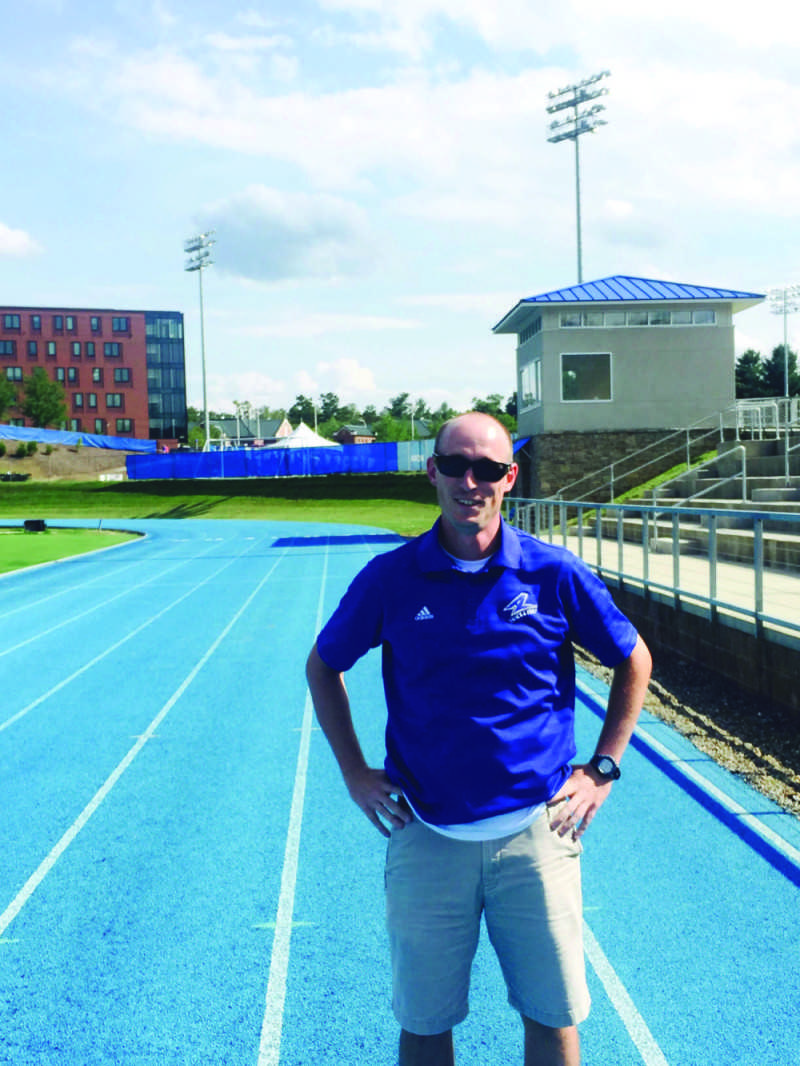 Soaked in sweat, the UNC Asheville men’s cross country team finishes up their workout with a series of hurdle drills and static stretches. The goal is to keep their muscles loose for the next day’s 11-mile run up and down the hills of the Pisgah National Forest. Standing over them, the new men’s distance coach watches, corrects form and gives suggestions to the freshmen.
“Cross country running is a beast on its own,” Coach Adam Puett explains. “You are going to have to come into each race and know that you are going to have to try harder, because each race will get more difficult as the season progresses.”
For the past five years, Puett has assisted head coach Jesse Norman during the cross country season. This year, Norman has given the responsibility of men’s distance coach to Puett.
“The thought process was for me to take over the role of coaching the men’s distance team year-round,” says Puett. “So they didn’t have that transition period of Jesse writing the training program in the fall and then me writing it for the rest of the year. I was always in the background giving my opinion to Jesse and we still do that, but now they will always have the same person to work with.”
Puett says that his new role will give Coach Norman more time to focus on fundraising as well as team and meet management. Norman already works with 18 runners on the women’s cross country team, as well as the track and field jumpers. Puett hopes to lighten the load for Norman. He says this transition has been in the making for a couple of years.
Coach Puett says he had a successful running career at Western Carolina University. He was the 2005 Western Carolina Male Athlete of the year, 2006 Southern Conference outdoor performer of the year, three-time All SoCon in Cross Country, 10-time All SoCon in indoor and outdoor track, five-time Southern champion in indoor and outdoor track, and four-time NCAA outdoor regional qualifier in the 1,500 meters. He won Southern Conference 1,500 meters for three straight years.
Danel Slaydon, former High Point University runner, recalls watching Puett at the SoCon Indoor championship.
“The first thing that struck me was that I had never seen anybody race like him,” Slaydon says. “It was pure heart and very, very gritty. He didn’t strike me as the fittest runner out there, but you could immediately tell that he was the toughest.”
Puett says he plans on making UNCA runners just as tough.
“You kind of have to have an approach of going out there and running hard,” Puett says. “You need to be able to focus internally, work on your mechanics and don’t overthink it. For example, we were out on a disk golf course doing 200-meter hill repeats. It was tough. The grass was wet, there are hills, it’s rooty with tight turns. I didn’t know what a good time for those would be, but I can look at you and tell if you are running hard or not.”
Puett also wants to have more individual meetings with the athletes. He says he wants to do more than talk training but also help with nutrition, race strategy and the psychological game of running.
Caleb Smith, current junior and co-captain of the UNCA cross country team, says he has experienced Puett’s one-on-one meetings ever since he was a freshman.
“He has always been there for me on and off the track,” Smith says. “I was really stressed out my first two years, and there would be a lot of times where he would come up to me and ask me how I was doing. He wouldn’t ask a single question about running, just more about my personal well-being and making sure I was adjusting to college well. That really meant a lot.”
Standards are set high this year for the men’s cross country team. UNCA was ranked fourth in the conference in the preseason rankings, which is the highest it’s been in the past few years. The schedule includes some big meets including pre-nationals in Louisville, Kentucky, where they will be racing the top teams in the country.
Andy Thornburg, senior and co-captain, says he is optimistic for the upcoming season. His goal is to be a top 10 conference performer.
“It’s been pretty clear from our team meetings that the goal is to win a championship,” Thornburg says. “I feel like my responsibility as team captain is to keep everyone confident that it is a plausible goal and to keep the team positive.”
Puett says he is excited to take on the role as the men’s distance coach, and he is looking forward to the responsibility.
“I think it’s a good responsibility to take over,” Puett says. “For the long term, some day it is one of my goals to have a whole program to myself and be able to inch along and take over more responsibility. It is just fun to be able to have that responsibility. It gives you something to wake up in the morning to and know that you have more things to do. It makes it fun to be there with the guys all the time, I love it.”
UNCA runners will continue to sweat and work hard for the rest of the season, all under their watchful coach determined to win a championship.

One thought on “Going the Distance”