Despite a hard-fought and hectic last few minutes, the Bulldogs were not able to secure a win in the semifinals of the Big South Tournament.

In the bout during last week’s tournament, held in Kimmel Arena, the Liberty University Flames upset the first-seed Bulldogs 69-64.

The match against Liberty was the Bulldogs’ last hurdle before reaching the championship game of the tournament and a chance to advance to the NCAA Tournament.

In the first period the Bulldogs pulled out a 38-26 lead going into halftime. Liberty came out strong during the second period and fired back to claim the win.

Liberty started the last minute of regulation time with a 62-56 lead. This last minute took over 10 minutes due to constant fouls and subsequent free throws from both teams, drawing outraged cries from the fans and coaches in reaction to the tough game.

r led the game in points, with 19 scored by each. 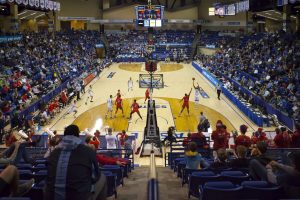