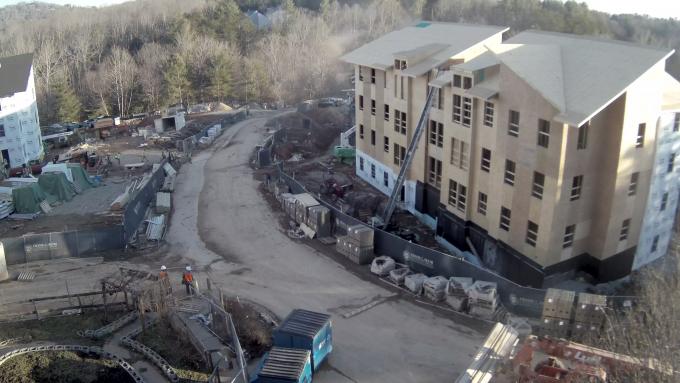 For the same amenities as off-campus apartments, plus the convenience factor, the new UNC Asheville residence halls will be an estimated $1,000 more per semester than living off campus.

“If people are willing to pay it, they’ll do the up-charge,” said Ryan McGinn, a senior psychology student who has lived on campus all four years of his college career.

Comparably, The Woods’ prices are roughly $1,000 more per semester than the counterpart. That is a steep price upgrade, especially when you consider the average price for the off-campus apartments in close proximity to the university (Hawthorne Northside, University Place and Sevier Street) range from $500-$700 per month, totaling $2,500 to $3,500 over the whole semester, when you split the rent with at least one other individual.

The Woods Residence Hall will include the usual amenities of the residence halls, plus the addition of a full kitchen in each suite. The inclusion of kitchens eliminates the requirement of purchasing a meal plan. Depending on their eating habits, a lot of students do not utilize the entire monetary value of the meal plan.

“I barely use the meal swipes in Brown because my dorm is the farthest from it. Also, the food is not consistently good. I just get all the declining balance I can get and use it on campus restaurants, which aren’t that bad,” said Caroline Kelly, a junior drama student and resident in Ashe Hall.

It is interesting to consider that the university is willing to break away from Chartwells in this instance, since all of the residence halls on campus require residents to purchase a meal plan. The Woods will be the only halls to allow students to opt out.

One could speculate that they are choosing to make this switch due to a rise of complaints regarding food options on campus. In fact, the student body has bombarded Brown Hall’s rating on the service dining page from 5.0 to an undercooked and under-seasoned 2.0. They have since removed the option to leave a rating on the website.

The recent housing crisis both in the university and the surrounding area of Asheville is what likely prompted the construction in the first place. However, the apartment-style is not the most efficient form of housing the university could have offered in terms of additional space. On the housing website an estimate states the new residence halls will add almost 300 beds to campus. This is the same amount of beds that Founders Hall offers and that’s only one building compared to six currently under construction.

“That’s interesting coming from those sets of complaints because freshmen are always guaranteed housing, so you would think that they would go with the most efficient housing option. It leads to those overflow situations. I worked in housing over the summer and they showed us, by survey, that the apartment-style was the overwhelmingly popular choice,” McGinn said.

It is likely the convenience factor of apartment-style housing that sparked desire from the students who were surveyed. You are able to experience apartment living on campus. Similar to how CVS adds the convenience charge to everyday items you could get for less at Target, UNCA is adding the price of convenience to the new residence halls when you can live for less off campus. For some this is not an issue, but an incentive.

“It’s probably cheaper to live off campus if you’re lucky enough to find cheaper housing. But with the convenience and the relatively nice housing, I find the price worth it,” Kelly said.

If convenience is the most important factor in your decision making, then the choice is easy. Unfortunately, cost comes before convenience in most cases, which means these halls will be unobtainable to the average student in an already pricey housing market.

“It does sound a little steep since the other dorms on campus are not that different in prices,” Kelly said. “But I checked online and the double rooms are around $3500 and the singles are around $4000 in the apartment-style buildings, but that doesn’t include the other expenses.”

Voter apathy drove me to drink for the cause