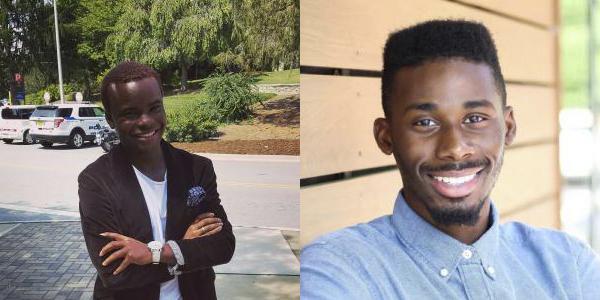 Davis and Anderson said they look forward to hitting the ground running with SGA following their initial senate meeting last Wednesday. Members of SGA were welcomed and a bill setting the SGA’s budget at $30,000 was passed unanimously.

Within the bill, $14,000 were alloted for salary of SGA Members.

Before the passage of the bill, Legislative Librarian Jackson Myers asked for the senators’ exact salary to be clarified by SGA advisor and Director of International Student Services Robert Straub.

According to Davis, this school year SGA will work in conjunction with UNCA’s faculty and campus organizations, such as Asheville Campus Entertainment and the Student Athletic Advisory Committee, to introduce programs and initiatives that are inclusive of minority students.

“We’re working closely with ACE as well as SAAC to ensure that these (programs) get done,” Davis said. “The chancellor herself is definitely taking interest in helping us push the initiatives that we have to bring the campus community more together and work more collaboratively and include all voices from all walks of life.”

Additionally, Davis and Anderson plan to reach out to some of UNCA’s sister schools such as UNC Pembroke, UNC Greensboro and North Carolina State University for input on how to  make programs more inclusive.

“For me personally, as the vice president and someone who is in tune with all the happenings of the campus and athletics, I’ll be kind of like the shepherd for the flock and steer in the direction of involvement on campus,” Anderson said.  ”Whether that be talking to the different teams personally, or talking to their coaches, who I have very good relationships with and helping to bring them out more in any which way I can.”

Davis and Anderson plan to work toward the goal of making SGA more visible and present in students’ lives this school year.

“Changing the dynamics of how we interact with other organizations, but then also with administration and then also the students; making ourselves more visible to students and definitely being more available for them,” Davis said.

SGA also hopes to become more visible to the city of Asheville by expanding their community outreach. Already, SGA is teaming up with alumna and former Associations of Student Government Liaison Rachel Maynard to help Erwin Middle School students create their own constitutions to form a student government association of their own. Davis hopes this program can expand to other local middle schools in the future.

In addition to his position as SGA president, Davis participates on campus in many capacities including his membership in the Black Student Association, while also working as student aid for the chancellor, student aid for public safety and serving on the Public Safety Committee for the UNC System.

Davis previously held the executive of diversity inclusion position with SGA. He believes his past work on SGA will contribute to his work this year as president.

“I’ve been through three administrations and I’ve seen what things work, what things didn’t work, what areas student government needs to grow in and then things that we’ve excelled in,” Davis said.

Anderson has also been very involved on campus by interning at UNCA’s Center for Diversity Education and participating in student groups such as the Political Science Club, Pi Sigma Alpha, the national honor society for political science and Kappa Alpha Psi. Anderson also served as one of the captains of UNCA’s track and field team, having been a member of the team until this year.

Although Anderson engaged in many organizations during his time at UNCA, this is his first year serving on SGA.

“I was inspired by my brother and mentor President Michael Davis to become a part of SGA,” Anderson said.

In addition, the two are interested in getting to know those interested in running for the freshmen senator positions once applications open Sept. 7.

“I’m excited to see who applies and hear their great input of how we can better UNC Asheville,” Davis said.