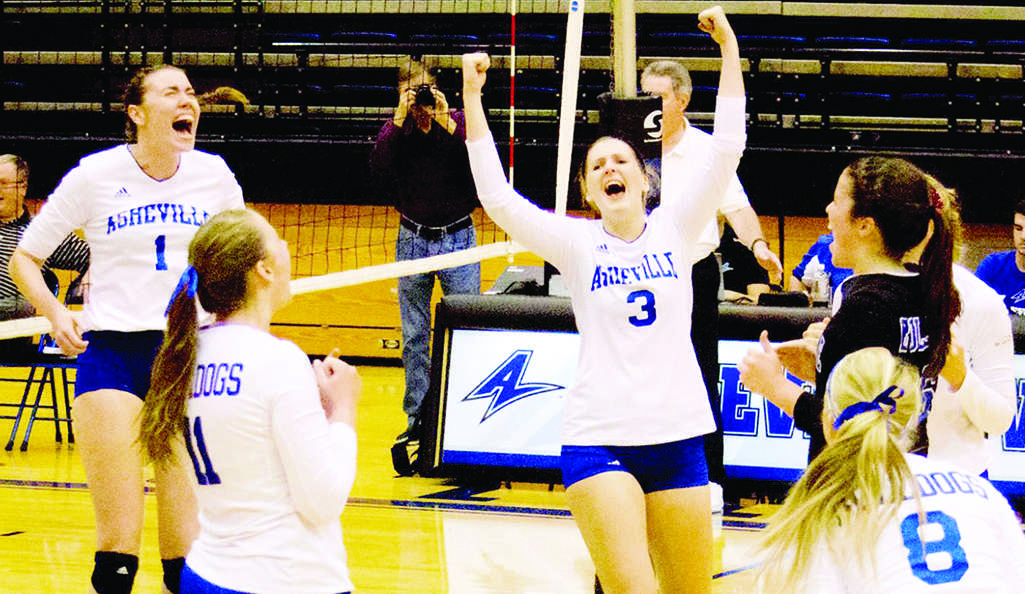 In a match against Wofford College, the young UNC Asheville volleyball team demonstrated promise as a team with its share of struggles.

The second home game of the year ended 3-1 and gave the Bulldogs their first win at the Justice Center.

“It was a good team effort,” said Frederico Santos, head coach. “Everyone helped pitch in to that victory, everyone from the starters to those going in off the bench.”

The first home game ended with a 0-3 loss to Western Carolina University.

According to players, after spending the first ten games of the season on the road, going home to the Justice Center was nerve-wracking.

“Our girls approached the game with a completely different attitude. We knew we had to do better than the week before and we came out with more aggressiveness and much better communication,” Santos said.

A recurring topic surrounding the team continues to be their ability to communicate and connect on the court. With only six of the 13 players returning from the 2013 season, the team said their concerns are building chemistry and learning how each other plays.

According to Katie Davis, junior setter, everything came together against Wofford.

“It was not an issue, our chemistry was great,” Davis said.

During this competition, UNCA showed confidence playing at home compared to the game against WCU.

According to coaches and players, the Justice Center can be intimidating because of the closeness of the stands and the fans hovering just on the edge of the court. This week the intimidation factor worked in the favor of UNCA rather than against them.

“I don’t think teams like to play here. It looks far away but during games those bleachers are very close (to the court),” Santos said. “Being at home and playing in front of our crowd with the right level of hope helped us to lead the match.”

Shelby Erickson, sophomore outside hitter, said the team’s morale during game situations also improved compared to when they lost to WCU.

“We stopped focusing on the bad things when they happened and more on the good things that were,” Erickson said.

UNCA dominated the first set and finished with a win of 25-15. They continued the momentum into the second set and maintained a lead that appeared would seal another win in the match. Wofford responded to a 17-11 deficit though and came away with a 23-25 victory. For some, this spurred questions of doubt regarding UNCA’s ability to adjust.

“Radford and Liberty are probably the strongest in the conference right now,” Santos said. “First, we are getting into rhythm after returning from the road and are watching game film to find their tendencies.”

Erickson said the way they played against Wofford is the same way they want to approach the weekend games. Starting with confidence in front of the home crowd.

“We have a really great crowd and against Wofford we were definitely more into it since we started off better,” Erickson said. “We are just trying to step up our level of play every day.”

Women’s soccer Senior Day ends in a win against Winthrop

Sports broadcasting and social media rise in importance during COVID-19