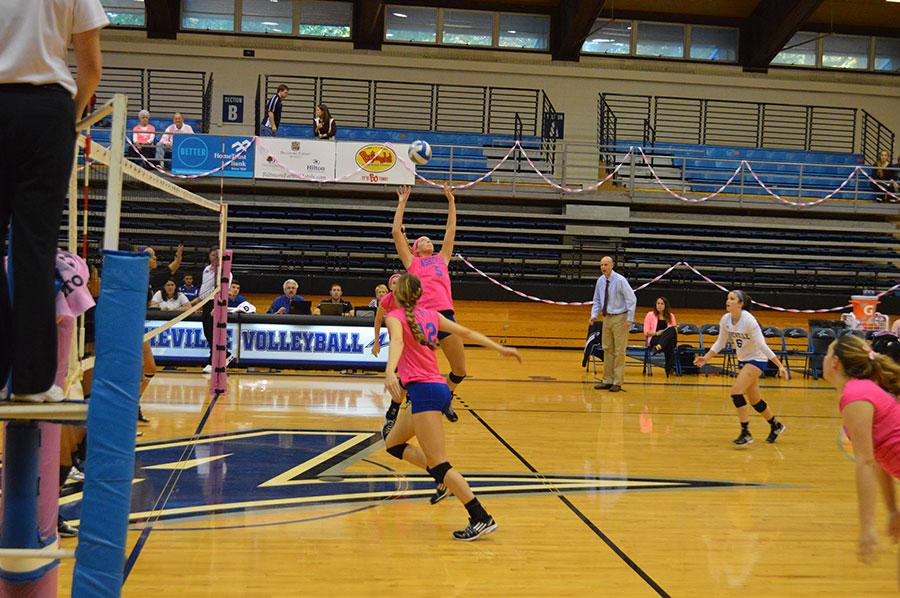 With the UNC Asheville Justice Center adorned in pink streamers and balloons, players revealed an alternative pink jersey — but the annual Dig Pink volleyball game ended in a hurry as a 0-3 loss to conference rival Coastal Carolina swept UNCA

“We didn’t play well. Individually we had some good performances but overall as a team we just didn’t play very well,” said Frederico Santos, head coach. “I thought we were disconnected a lot of the match, and playing individually in a collective sport is very difficult.”

The first set ended with a wide 15-25 margin and a Coastal win.

For most of the second set, UNCA trailed by only a few points and looked as though they would respond, but an attack error ended the set 25-23, once again giving the win to Coastal.

Coastal finished off the match in the third set outscoring UNCA 25-17.

According to Santos, the team’s struggle to concentrate and finish plays contributed to the loss, along with lack of communication.

“Execution was a big problem and also probably lack of focus,” Santos said, regarding the issues on the court.

Cat Fischer, sophomore, stood out with 14.5 points, which were the most recorded by either team, along with Katie Davis, junior setter who led the game in assists.

Junior libero, Bryn Pfeiffer played well. On multiple occasions she stretched across the hardwood to keep the ball in play for the Bulldogs.

This effort was not enough to keep them in the game though as the team collected a total 23 errors compared to the mere nine put up by Coastal Carolina.

“We fight, and we do want it, but it is our errors that cost us the entire game,” said Christine Lakatos, sophomore outside hitter. “They didn’t do anything super special, it was just us giving them errors and you can’t win a match with those.”

Throughout the game the team lacked consistency, Lakatos added.

“That’s not going to get you a win against a good team,” Lakatos said. “I think we had a couple good performances from a couple people but that was about it.”

Even with their struggles, Lakatos said they never gave up.

“We always fight really hard and that’s something that you can’t teach,” Lakatos said.

Although UNCA did not capture the win, Erin Spence, director of corporate partnerships and marketing, said the fundraising during the Dig Pink game was successful.

Ladies Night Out received donations at the swim meets and volleyball games that took place Friday and Saturday.

During the volleyball games, fans offered a monetary donation for each block, dig, kill and ace the Bulldogs recorded during the two games.

UNCA also auctioned off a pink breast cancer awareness volleyball signed by all the players. This year the ball went for a bid of $100.